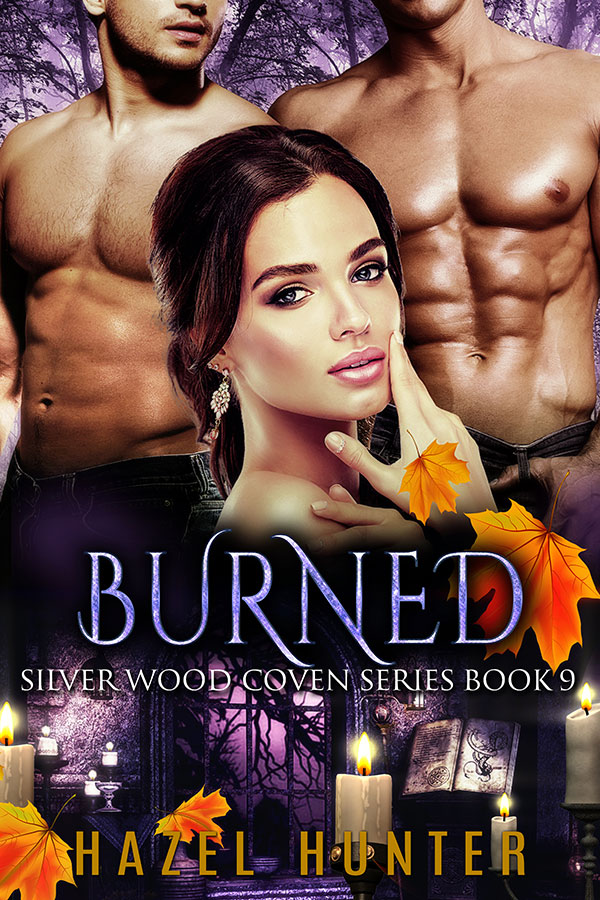 A homecoming that tempts fate.

As Summer finally makes the journey to her mother’s home, she finds bittersweet memories waiting. Though it was the place that she was raised, her parents were murdered there. The more Summer learns about her mother, the more her own life as a Guardian becomes clear.

Meanwhile Troy and Michael do their best to put their differences behind them, but it may come too late. The power that has saved them all so many times, slowly starts to withdraw.

This is such a good series! It keeps getting better with each new book. We are treated to new revelations. Summer escapes trouble just to get back into some other type of trouble. It keeps me on my toes guessing what will happen next. I can't wait for book ten!

What a rollercoaster ride. I'm so into this storyline. Ms. Hunter never disappoints. So there are quite a few revelations in this book. Many questions are answered. Templars and madness seem to go together, but the cause is a bit of a shock. Enemies can become friends and friends are revealed as enemies. And one manipulative player gets played… I believe comeuppance is coming! I can't wait for the next book!

Things in this book get really HOT and Fiery, Literally. Will Summer and her men finally find the arsonist that is setting all the wiccan's places on fire, or will they burn in the process? You MUST read this series from start to end. Looking forward to the next book in the series

Fantastic. I think this is the first series I've read, apart from Tolkien and G R R Martin, where it just keeps getting better and better. The writing is more confident, more fluid, the characters more scoped….. The plot just seems to come together. For a not fan of witchy things, I've fallen in love with the series, keep it coming!

SNOW CRUNCHED UNDER Michael Charbon’s bare feet as he walked through an endless forest of enormous gray-barked maples. Still slumbering through the last weeks of winter, the massive trees and their frost-veiled branches formed a canopied walk that led to an old sugarhouse. Michael breathed in deeply, letting the frigid air fill his lungs, and smiling when it didn’t make him cold. He felt warm all over, which he also understood. The icy air and the frozen ground didn’t chill him because it wasn’t real. Somewhere else he lay sleeping with his mates in a warm bed. Everything around him was nothing more than a dream.

As he reached for the latch of the weathered wooden door, Michael grinned. Inside he knew he’d find his mates: Summer Lautner, his beautiful witch lover, and Troy Atwater, his dark warlock brother. Troy was using the telepathic connection they shared as Summer’s sentinels to call to him. Or were they sharing this dream with him now? He hoped so. They had been at odds with each other for far too long.

Michael, can you hear me?

Troy could be so impatient. Reckless, too. Since traveling to Canada to claim the two estates Summer had inherited, there had been too much contention between them. Here at Douce Lune Farm things had finally come to a head, but that had allowed them to end the rift tearing the three of them apart. Whatever coming challenges they had to face, Michael felt sure they would do it as a triad: three made one.

The latch vanished, and then the sugarhouse and the forest dwindled as darkness swamped Michael. Something clamped over his face like a mask of smothering wool, and his nose and lips felt like ice. He wanted to touch his face, but his arms would not move. They seemed cold and numb, and he could not feel his hands at all. Slowly he realized he had awakened, and his entire body had been immobilized. Whatever had been done it had also dulled all of his senses, and slowed his heart to a weak, sluggish pulse. He felt no malevolent magic working on him, but a strange need to laugh bubbled up in his chest.

We’ve been drugged, Troy thought to him, and Summer is gone.

Knowing someone had taken their Beauty made Michael fight through the numbing haze and bizarre hilarity gripping him. He tried to take a deep breath, but his lungs filled with hot, acrid smoke instead of air, and he choked. As his body jerked, for the first time Michael felt the steel chains binding his wrists up over his head.

You have to hold your breath, Paladin. Troy’s thoughts came into his mind like a rush of cool, calming water. The farmhouse is on fire. Break the chains imprisoning us. Use your Wiccan power.

Michael coughed out the last of the smoke and tried again to use his hands and arms, but they were useless. Anger roared inside him, but he clamped down on it in order to send his thoughts to Troy.

I cannot. My ability controls stone, not metal.

Steel is made from iron and carbon. Troy sounded odd, as if he were about to laugh out loud. Carbon is made from coal. Focus on that. Remove it from the chains.

What his sentinel brother asked seemed impossible. Michael didn’t have the same control over his power than Troy had over his elemental ability with water. Yet if he didn’t free them, they might burn to death, as fire was one of the few ways to kill immortal Wiccans. Not breathing made his lungs burn, and his head spin, but Michael drew on his love for Summer as he summoned his power, and poured it into the chains.

The links grew hot as they rattled and twisted, and then an amber glow illuminated the bed. Pain racked Michael, who thought for a moment that his arms would pop out of their sockets. In his desperation he prayed to the eternal Mother who watched over them all: Goddess, please, help me free us, so that we might save her.

Michael’s power took on a blinding white corona, and the chains shattered.

As the walls sprouted flames, Troy sat up and held out his shaking hands toward the bath. Water came flooding out in a wide stream that splashed over them and the bed before rushing out to douse the fires around them. Michael untangled himself and staggered to the door, nearly falling down as the water rushed around him and streamed downstairs.

As soon as the flames were extinguished Troy directed streams toward the windows, freezing them into icy spears that smashed through the glass. Smoke wafted out, and cold, clear air rushed in.

“Beauty,” Michael gasped as soon as he could take in a breath. The compulsion to laugh seized him again.

“He took her,” Troy wheezed, as he gripped his shoulder. “Look at me.”

When Michael did he muttered a spell that made him shake and double over. He coughed out a moist cloud of sharp-smelling gas. Troy did the same.

Michael stumbled over to the bed, shoving it aside as he picked up a large, hissing canister. He dragged Troy over to the window and flung the canister through it.

“How the devil do you know that?” the dark warlock demanded, and heaved in the cold, clean air.

Michael didn’t want to tell him, but his brother had to know who and what they were facing.

“Templars use it on powerful Wiccans they wish to capture alive.”

“Us they were content to burn to death. Another Templar favorite.” Michael paused. “But how could they have found us? No one knew we were here.”

Michael didn’t want to believe that the High Priestess of Artemis Coven would have betrayed them to the Templars who had been hunting Summer. Yet she had come to the farm to try to seduce him, which he had resisted. He’d also used force to make her leave. Even so, he shook his head.

“If she called Malveaux, he would have sent a team.”

“Get us some clothes,” Troy said and headed for the door.

While the dark warlock went to extinguish the last of the flames downstairs, Michael collected what dry clothing he could find. He imagined Summer in the Montreal Priory, surrounded by angry Templars determined to learn the location of the oldest and most powerful grimoire in existence, the Emerald Tablet. What none of them knew was Summer possessed all the knowledge of that ancient spell book, locked away in her mind.

Michael’s own emotions faded as he drew on the remote, dispassionate focus that had kept him alive through Holy Crusades and Saracen prisons. He would find their Beauty, and then he would kill the one who had taken her. This monster had set his last fire. After Michael yanked on his clothes he brought some to Troy, who showed him a broken bottle that smelled of petrol.

“He used a Molotov cocktail to start the blaze.”

If they still had a chance to rescue their Beauty before the Templars harmed her, then they had to go now.

“Get our coats and the bag of weapons from the closet,” Michael said.

Once they were outside in front of the farmhouse, a strange glow on the horizon confused him. It was still too early for sunrise. Then Marcel, the farm’s manager, came rushing from the back of the property, his gray hair standing on end as he shouted in French.

“No,” Michael said and stared at the wall of flames and billowing smoke marching toward the farmhouse. “He set fire to the maple groves.”