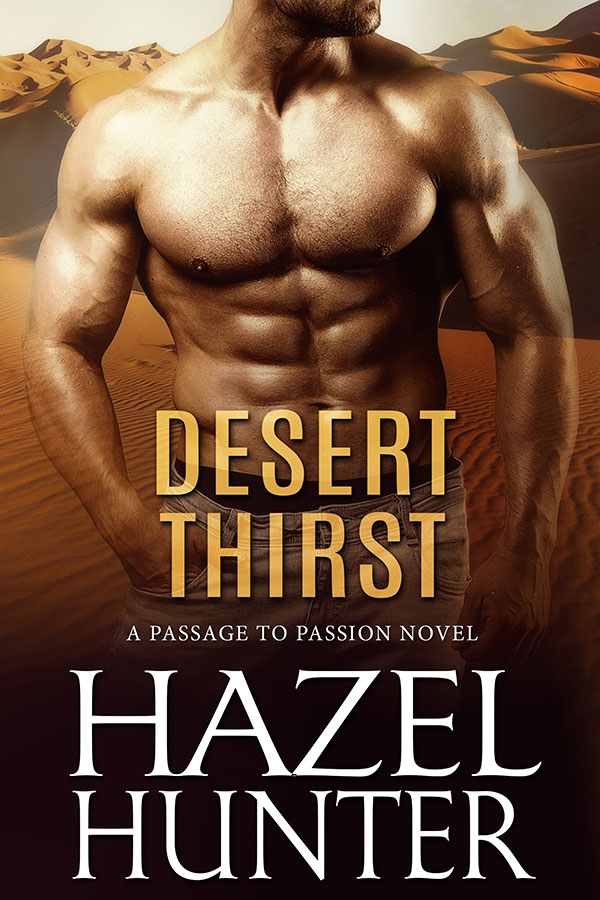 When the heat is this scorching, passion is never far behind.

Although biologist Lou Thornton had prepared herself for the high temperatures of the Sahara Desert, the heat from her guide is about to melt her. Something feral burns beneath his powerful and controlled exterior.

Master tracker Quinn Caldwell is a man of few words, but all his senses are on fire. Words are the last thing he needs to know that his feisty biologist is aroused.

But as they track an endangered species, neither of them realizes they’re being track as well. Isolated in the barren wilderness, they are to become prey to a very dangerous predator.

Lou wiped the sweat from her forehead as she shouldered the camera bag. It was spring, not yet midday, and already one hundred degrees. When the plane had taxied toward the lone building on the tarmac, the pilot of the Air France flight had rattled off the local conditions in Tamanrasset, her final destination in Algeria. The key conditions that struck her were the single digit humidity and the triple digit temperature.

As she emerged from the front hatch onto the metal stair landing, she shielded her eyes from the sun.

God it was hot–an intense heat unlike any other. Then again, it was the Sahara desert.

She shuffled in line with the men. Ever since leaving Algiers, she’d been the only woman except for the stewardesses. Stolen looks and not-so-stolen looks surrounded her.

Let them look. There’s nothing to see.

Although it was insufferable, she wore long sleeves and capri pants. Not only did local culture dictate it, the intensity of the sun on her fair skin did as well. As she slowly made her way down the stairs, sweat trickled from her temple and she wiped it away. Some of the heat she felt was the climate but some of it was him. She glanced at the terminal. Quinn would be waiting there.

Tall, gorgeous, and scary. That’s how one of the girls at the Washington D.C. office had described him but the group photo she’d posted on Facebook didn’t do him justice. Lou had discovered that on her first visit. But scary wasn’t the right word. There was something beneath his gruff exterior and it wasn’t soft or sensitive. It was hard, even dangerous, and it was anything but scary. It was irresistible.

She started down the stairs, grasped the rail to steady herself, but immediately yanked her hand back.

It was hot enough to burn! How quickly she’d forgotten.

The man below her paused and turned. He was smirking.

“Never touch metal in the desert,” he said in French.

Like most of the other men, he wore a white, short-sleeved shirt and long pants. His dark eyes glinted but never met hers. Instead, a few steps below her, they were level with her chest. He stared.

Lou drew her mouth into a tight line and quickly grasped the camera bag strap at her shoulder with both hands, using her arms to cover herself. She’d been about to make a retort when he turned, still smirking, and continued down the stairs.

She took the next few steps slowly, to keep away from the man below her, and didn’t touch the handrail. The checked luggage was already arranged in rows on the ground in the shadow of the plane.

Though it hardly seemed possible, the black surface of the tarmac was even hotter. As she bent to pick up her backpack, she felt the heat radiating upward. For once, she was glad for the thick-soled boots. She put on the large backpack and held the camera bag by the handle. It contained all the tech-gear that she couldn’t trust to the luggage system. The terminal building was only a couple hundred feet ahead. The line of passengers had broken up and the men were moving at different paces but the one who’d been in front of her was still nearby, looking at her with sidelong glances.

She ignored him. In a few moments, he’d want nothing to do with her. On the other side of that dark glass, Quinn would be waiting.

At least Lou hoped he was.

Quinn stood with his arms crossed, watching through the tall windows as the passengers headed across the blacktop. He’d recognized Lou the moment she’d exited the plane. Her red hair stood out like a beacon.

Few foreigners ventured this far into the south of Algeria–mostly people like himself or Lou, field agents for the World Wildlife Fund or working for some other international groups. There were also some adventure travelers and eco-tourists but they almost never travelled alone. Quinn scanned the men around Lou but no one spoke to her or even walked near. She seemed to be alone.

He hadn’t looked closely at the email except for the date and time of her arrival. Technology frustrated him. He’d just assumed the guy would be with her. He watched with new interest as she approached and the men hung back around her, trying to get a look. The turquoise blouse hugged her curved figure. Along with the thin and clinging pants, she might as well be wearing a sign that said ‘look at me,’ which Quinn was content to do. Behind her, the metal gangway was empty and no more passengers were visible at the plane’s door.

It’d been four weeks since he’d sent his infrared photo of the Painted Hunting Dog to the local field office. Once thought extinct in the Ahaggar Mountain region of the Sahara, his finding had sent shock waves through the conservation community.

He had been tracking it for months without success and though his gut instinct had told him that the elusive creature was there, he hadn’t had the evidence he needed. He’d been patient, though, something that bushcraft and desert survival had taught him. Eventually, it had paid off.

At the plane, the crew was disembarking.

Easily a head taller than anyone else and standing behind the crowd, Quinn could see everyone. As Lou entered, she saw him immediately and altered course, all without breaking stride.

And she was alone.

Her heart raced a little and she realized she was actually nervous. He was exactly like she remembered him. Olive-skinned, dark-haired, with deep-set eyes, he looked like he might be an exotic mix–maybe part Berber–though he’d never said. He wore long, nicely fit pants and his half-sleeve shirt seemed overstuffed–in a good way. His hair was a little longer, a little wilder, and she decided that suited him. With his arms crossed and the easy stance, he looked like an Olympic athlete, as well as a bit imposing.

“Your head should be covered,” he said.

Same old Quinn. Not even a hello.

“You’re asking for trouble,” he said. “Wearing clothes like that and not covering your head.”

“Pants that aren’t long enough,” he said, looking down at her shins.

“Not long enough?” she said, looking down at herself.

She put her hands on her hips. The clothes she was wearing were already too hot. The last thing she needed was to wear more.

“Do you have something for your hair?” he said. “Like a scarf?”

She looked back up at him and exhaled.

“Look, it’s not like I’m a local or that I’ll ever look like one. This is already way more than I had planned to wear in weather like this.”

“You’re not a local,” he continued. “And drawing attention to yourself is the last thing you want to do. Things have become a little tense since you were here.”

“I see,” she said, feeling her jaw tighten.

She’d read the brief on the plane. This part of Algeria had been a crossroads for centuries. Several violent elements traditionally intersected here and those now included terrorists. The rate of kidnappings of foreigners had recently surged.

He stood there looking down at her, waiting. The square jaw that seconds ago had been handsome now looked set.

She sighed, setting her camera bag and backpack on the floor.

“A bandana will have to do,” she muttered.

She dug around in one of the middle pockets for it.

“It’s for your own good,” he said, as she took it out. “Every man in here is watching you. A woman who looks like you needs to be extra careful.”

She hesitated. A woman who looks like me. She almost smiled.

“The scarf will help,” he continued.

She found the bandana and also the small canister of mace.

“Mace,” she said, dropping it into a side-pocket of her pants. “I hear the situation in the area has become tense.”

She ignored him and started to drape the bandana over her head.

“Not here,” he said quickly. “Do that in the restroom.”

“Okay, Quinn,” she said, putting it on. “Let’s get this straight now. I don’t take orders from you. I know this is Algeria.” She tied the corners of the bandana at the back of her neck, under her hair. “I saw plenty of women in Algiers who dressed more modern than this.”

She picked up her pack and slung it over both shoulders but took the opportunity to quickly scan the terminal.

“This isn’t Algiers,” he said, glancing around. He looked back at her, directly in the eyes. “And I’m not giving you orders. I’m trying to help.”

She nodded and picked up the camera bag, trying not to be aware of his dark eyes on her.

“It’s been a long trip,” she said, softening her tone as well. “Maybe we can just get going.”

“Where’s your partner?” he asked, looking over her head toward the plane.

He looked down at her.

“I told you last time, I don’t have a partner. Jim was only here because he was interested.”

Quinn actually smirked at that, which, for no reason she could put her finger on, was infuriating.

“Sure,” he said, not offering to help with the backpack or the bag.

She had actually been looking forward to seeing him. Apparently the feeling hadn’t been mutual.