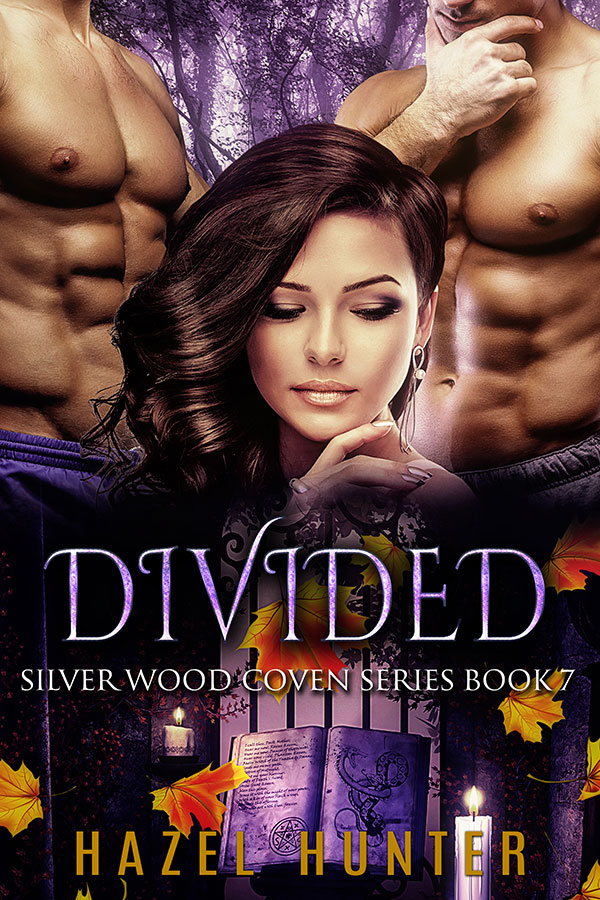 Although Summer had hoped that visiting her father’s house would bring her comfort, the manor raises more questions than it answers. Why did he give up his beautiful and enigmatic home? Was her father’s secretive work linked to her parent’s murder? But as Summer delves into its mysteries, her mates pursue their own paths.

Troy turns to a former Magus Corps mentor to help him give Summer back her life. Michael contacts an old Templar comrade to discover what the local priory knows. Though their love for Summer is strong, their trajectories diverge—setting them on a collision course that puts them all to the test.

Divided is a quick and enjoyable read. It has action, drama and romance.

These books just keep getting better and better…All in all, this book was brilliant and I cannot wait to read the next installment.

Wow this is one action-packed series. The build in this story is off the charts wild! The characters, the drama, the mystery is amazing.

Totally thrilled by the continuation of this series. How will Summer handle the problem now faceing her? This book is a wild rollercoaster ride, I wasn't ready to get off. this series is contagious!

This book was amazing! I can't wait to read the next book. The story line was excellent, the book well written. It sucks you in, and you get caught in the emotional whirlwind. So many new developments happened in this book, and I really want to find out what happens next!

FIERY RAIN FROM a Molotov cocktail drenched Summer Lautner, enveloping her in blistering heat as she choked on thick black smoke. As soon as the blazing petrol touched her skin, however, it activated a spell branded on her flesh. As enchanted green ice encased her, the lethal fluid instantly evaporated. Through the freezing shroud Summer could see more flames turning the bins of herbs around her into charcoal. Whoever had set the herbalist’s shop on fire had meant to burn it to the ground.

She had come to Montreal to escape the sorrow of losing her unborn daughter, not deal with more evil. But darkness had followed her here, and found her, and the only way she might hold it off was with a legacy she hated and could no longer control.

Was this to be her fate, then? To be forever on the run from death, and enslaved by a power that she hadn’t been trained to use? Her ignorance had already caused her to miscarry. How much more would it take from her?

The enchanted ice expanded from her to form a gigantic, protective sphere against the smoke and flames. Through the shimmering green she could see a dozen other shoppers on the floor around her. If she didn’t do something, their blood would be on her hands, too. She struggled to her feet.

“Come to me,” Summer murmured.

She extended her hands and channeled her power to the fallen mortals. One by one they rose, and shuffled like sleepwalkers toward the icy emerald bubble. As soon as they touched it, the ice opened to allow them in, and closed behind them. The middle-aged woman who owned the shop came out of her daze first, and her jaw dropped as she stared at Summer.

“How are you doing this?”

“She’s the one they’re trying to burn,” a heavy woman insisted. “I saw it. The fire started right after she came in here.”

The voice of an old crone in Summer’s head cackled.

They call themselves pagan, and yet at the first sign of true Wiccan power they turn vicious.

Summer had no choice but to listen to the voice, which belonged to the Emerald Tablet. As the Guardian of the oldest grimoire in the world, she contained all of its knowledge and power, a duty for which her bloodline had been created. Since miscarrying her tiny daughter, however, Summer had been at odds with her legacy. The Tablet had responded by denying her access to her power—until now.

“The Goddess protects us all,” Summer lied to the shopkeeper, and turned to the heavy woman, whose hatred showed on her face. “Why would you think someone was trying to burn me?”

She pointed at the ice. “Because you’re a fucking witch who can do this.”

A huge, charred section of the ceiling came crashing down next to the icy bubble, making everyone shriek and cower.

“Can you get us out of here?” That demand came from a pale brunette holding a squirming, tow-headed preschooler. “Please?”

Summer focused on moving the bubble to the nearest exit, but it didn’t budge.

You will wait, Guardian, the old crone said harshly. Wait for your sentinel mates, and give thanks that I choose to save you.

“Don’t hold your breath,” Summer muttered, and then saw how the others were looking at her. “It’s all right. Help is on the way. We just have to wait.”

The heavy woman came up to her. “You’re lying.” She looked at the other mortals. “Haven’t you seen it on TV? There’s an arsonist who’s been torching places all over Montreal. Dozens of people have been burned alive.” She shook a ham-sized fist at Summer. “You let us go.”

“I’m not keeping you here,” Summer said. She saw how the woman’s fear and hatred were infecting the others. “Why would I set fire to the shop, and then save you?”

“You’ve trapped us in this thing,” the woman shouted.

“Oh, my God. Look at her eyes,” the brunette holding the child said, backing away from Summer. “They’re glowing green.”

“See? She’s got a demon or something inside her, the fucking witch.”

The heavy woman tried to punch Summer in the face, and then went still as the bubble engulfed her and began pushing her out into the fire.

“No,” Summer cried out, reaching to drag the woman back inside.

As soon as she did the shopkeeper got between them.

“You shut up and calm down, you idiot,” she told the woman, and then turned to Summer. “It’s getting harder to breathe. I think the air is running out. We have to do something.”

Hissing clouds of steam suddenly rolled over the ice, turning it opaque. Everyone dropped down, huddling together as the bubble began to melt. Summer saw huge stones erupting from beneath the store’s tiled floor, knocking aside the burning rubble and creating a crude path. Then two tall forms appeared on the other side of the ice, both with cloth tied over their noses and mouths.

The largest, golden-haired man’s gilded green eyes narrowed as he gestured at the huge stones, which hurled themselves at the last of the burning debris to smash it away. His magic, which glittered like a jeweled amber mist in the air, took on a greenish tint as it blended with Summer’s power.

“Michael,” she whispered. She almost started weeping with relief.

Michael Charbon pressed his big hand on the other side of the ice as he gazed at her. His mouth moved, and while she couldn’t hear him she knew what he said: Beauty.

Sparkling water infused with heavenly blue light rushed around the base of the bubble, thanks to Troy Atwater, Summer’s other sentinel mate. The tall, dark warlock used his elemental water power to direct dozens of sprays at the fire, dousing it until it extinguished. Only then did he look at her through the ice and nod, his expression grim.

Summer swept her hand along the inner curve of the bubble, using her power to create an opening.

“Through here,” she told the mortals. “Hurry now.”

Her mates guided the people out through the smoke, handing them off to the fire fighters who were now entering the smoldering shop. The last to go was the shopkeeper, who turned and touched Summer’s arm.

“Thank you for saving us.”

Summer grasped her hand. “I need a favor.”

“You didn’t see magic here today,” Summer said. She glanced at the shoppers who were being guided out. “No one did. It was a new fire suppressant system…of some sort…”

The woman covered Summer’s hand with hers. “And it was destroyed in the fire.”

Summer nodded as they exchanged a conspiratorial smile. “Good,” she said.

The woman made her way to the firefighters at the front of the store. As she passed Troy and Michael, they turned to look at Summer, who let the remainder of the bubble evaporate as she smiled at them.

“I think dinner is going to be a little late, guys.”

Michael got to her first, and swept her off her feet as he enveloped her in a tight embrace. Almost immediately he set her back down and began running his hands over the scorched remains of her clothes.

“We felt the fire burning you.”

“I’m not hurt,” she said. “The spells on my skin protected me.” She looked past him at Troy, who stood watching them. She saw the fury glittering in his eyes, and reached out to him. “Did anyone see who did this?”

He shook his head, making blue lights dance in his long mane of sleek black hair.

“We beat the fire department by minutes, but there was no one outside or anywhere in sight.” His stern expression softened as he took her hand, and lifted it to his lips. “I’m glad you’re all right, love.”

Summer touched his cheek. “Thanks to my mates, I always will be.”

“We must go,” Michael urged, nodding at the new wave of fire fighters cautiously entering the building now.

He led them to the back door of the building, which he and Michael had to force open. On the outside Summer saw that the door had been jammed shut with a length of wood propped under the knob.

“He bars all the exits first,” she muttered, throwing the wood away in disgust. “So no one inside has a chance to escape. That son of a bitch.”

“He is a dead man,” Michael assured her, his voice flat with barely-contained rage.

“I don’t think it was a man,” Troy said. “I saw a van driving away from the shop just as we pulled up. Ally Martel was behind the wheel.”

Summer stared at him. Ally belonged to Artemis, a Wiccan coven to which her mother had once belonged. She’d already had some unpleasant encounters with Lorena Paquet, Artemis’s High Priestess, and Ally was Lorena’s bodyguard.

“Why would she set fire to an herbalist’s shop?”

“To make it look like the arsonist did it,” Troy said. “So everyone would think that he’d killed you.”