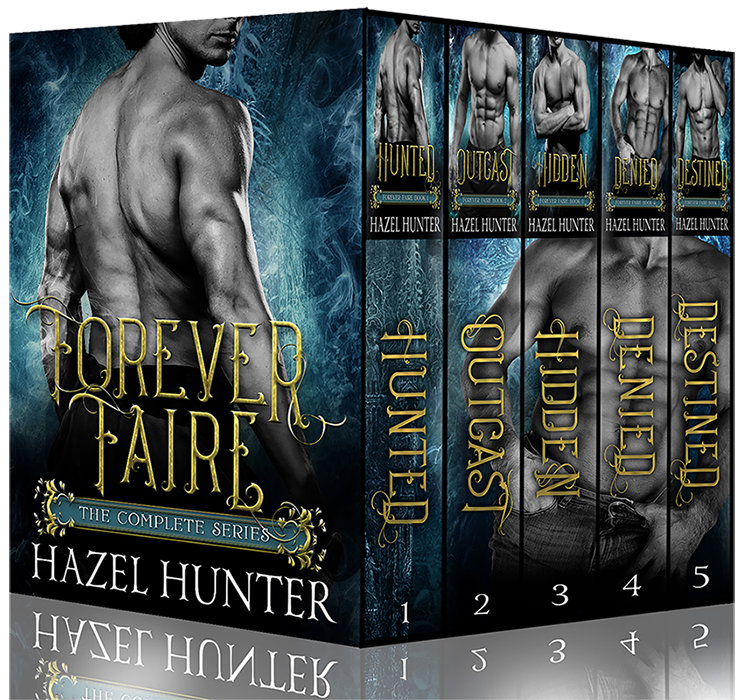 She’s found a magical lover. But is he real?

Kayla Rowe and her little sister are running for their lives. Chased from town to town by a gang of bikers that no one else sees, Kayla is down to her last dollar and out of ideas. But when she stumbles into the winter camp of a man who is larger than life, her world changes.

Although Fae warrior Ryan Sheridan is entranced by Kayla’s beauty and courage, he has a band of fellow exiles he must protect. Disguised as performers in a Renaissance fair, he and his comrades hide in plain sight. But when evil follows Kayla, Ryan can no longer turn her away—or deny the passion that will upend both their worlds.

WOW!!! This was a Gr8 story. I love stories of the Fae & I think this one just became my favorite. Hazel, I love the way you bring all of the people together in this story & how they all intersect. 5 Thumbs up. I loved it.

So much action, griping storyline, fantastic characters. Honestly I couldn't put it down! The mystery, intrigue and suspense are mind blowing. This is easily one of my favorite series I have ever read. If your into magic, fae, and amazing storyline you have GOT to read this one.

An ending that will surprise you.

Her writing is concise and brings you out of your world and into hers.

I loved these books. I'm glad I discovered them after the series was complete, because it would have been torture waiting for the next book.

Wow…… Now this is a series i will read again.

Brilliance in a Box Set. This is hands down one of my favorite series collections. Bringing Hazel's unique spin to the world of the Fae was a stroke of absolute genius. The Forever Faire series is a fantastic, vivid, and vibrant story.

This book is a magical ride filled with as many ups as there are downs.

I enjoyed the fact that the heroines in this series did not become damsels in distress, but were very much saviors.

“THERE ARE WORSE places,” Kayla Rowe said, as she stepped over a fallen tree trunk. Her foot sank into another fresh snowdrift. “I could be in the Sahara.”

She slogged through to a more sheltered patch of ground and stopped, her heavy breaths billowing in the frosty air. With a grunt, she stomped off the clumps of icy powder that clung to her jeans.

“Not that I’d really mind the desert,” she said. Talking to herself helped her ignore the fact that she couldn’t feel her face or her hands anymore. “Camels aren’t so bad, and my tan needs work. Mirages could be fun.”

Kayla rubbed her ears and nose with her stiff gloves, hoping to restore some circulation, but didn’t feel that either. Growing up in hot, sunny Florida left her ignorant of exactly what frostbite felt like. No doubt she’d find out soon enough. What she could feel was every gulp she took of the thin, sharp air. It burned her lungs before clawing its way out to form white clouds. Right now a bunch were drifting in front of her nose, like so much ghost tripe. The thought made her stomach sink.

“Add nausea to the frostbite,” she muttered, and swatted at her floating breaths.

At sunset she’d abandoned her rental car to walk the rest of the way to town. She must have covered at least five miles by now, but the darkness made it hard to tell. Leaving the winding road to take a shortcut through the woods had seemed brilliant—until she found herself dodging trees, brush, and knee-high drifts. If not for the light filtering down from the full moon she’d probably be walking or falling face-first into them. Who knew Tennessee would have snow?

How Kayla missed Florida, and the little cottage she’d shared there with her sister. More than anything her heart still ached over giving up her job at the riding academy. The students and other trainers she’d worked with had been great, but leaving behind the horses she’d trained and cared for every day for the last three years had been like running out on family.

Cantankerous old Stan, who considered himself in charge of everything at the stables, had been particularly upset about her leaving.

You can’t go, he pleaded. We need you here. You’re not like the others. You’re one of us.

I know. I’m sorry, she thought. She couldn’t avoid the hurt in his big brown eyes. But if I stay, and they found out where I work…what if they came here and hurt one of the kids, or you?

Leaving her beloved job behind had been a smart if emotionally difficult choice. Hiking alone through the woods in winter, on the other hand, had been an exceptionally dumb idea. So had forgetting to charge her mobile. Kayla still couldn’t believe she hadn’t once glanced at the car’s dashboard since leaving North Carolina. She’d never in her life run out of gas.

The rental had begun sputtering as soon as she had gotten off the highway, and coasted to a long, slow stop just as she’d passed a sign that read ASHDALE 7 MILES.

Kayla couldn’t blame her idiocy on the car, or anyone but herself. Though she’d been relieved to lose the thugs stalking her and her sister, Tara, the relief had made her careless. She’d been so busy congratulating herself on the success of her clever plan that she’d forgotten how often the universe liked to mess with that kind of thing. Now it seemed to be gloating.

You’re not out of the woods yet, Rowe, and guess what? Now you might freeze to death in them.

Through the trees she could see the lights of the town as dozens of tiny jewels spangled the dark horizon. They promised warmth and shelter and her sister. But their distance meant she had at least another two or three miles to hike. If she got to Ashdale, she’d then have to find her way to the cheap motel where Tara was waiting.

“When I get there.” Kayla pulled the edge of her wool scarf up over her mouth and nose. “No ifs. When.”

She trudged on, every step leeching more strength from her tired, overworked leg muscles. Once winter’s teeth finished gnawing her limbs, she suspected it would start in on her chest and belly. If the cold got to her core, she might never make it out of the woods. Her younger sister would be left helpless and alone, with no one else in the world to look after her. Tara already coped with horrible bouts of depression, which had been especially frequent since their father had passed away. Losing her only living relative might finally push her to–

“Knock it off,” Kayla yelled, though her lips were numbing.

She breathed in through her nose and out her mouth until the shriveling knot in her chest loosened. She wasn’t giving up, not this close to making it. She would get to town, and her sister, and then they would figure out where they could stay for the winter.

All she had to do was walk two more miles, and not die trying. Kayla thought about her sister, but the image of Tara’s thin face soon faded. Instead she remembered the other reason she had to keep going—the reason they’d ended up in Tennessee—the stalkers.