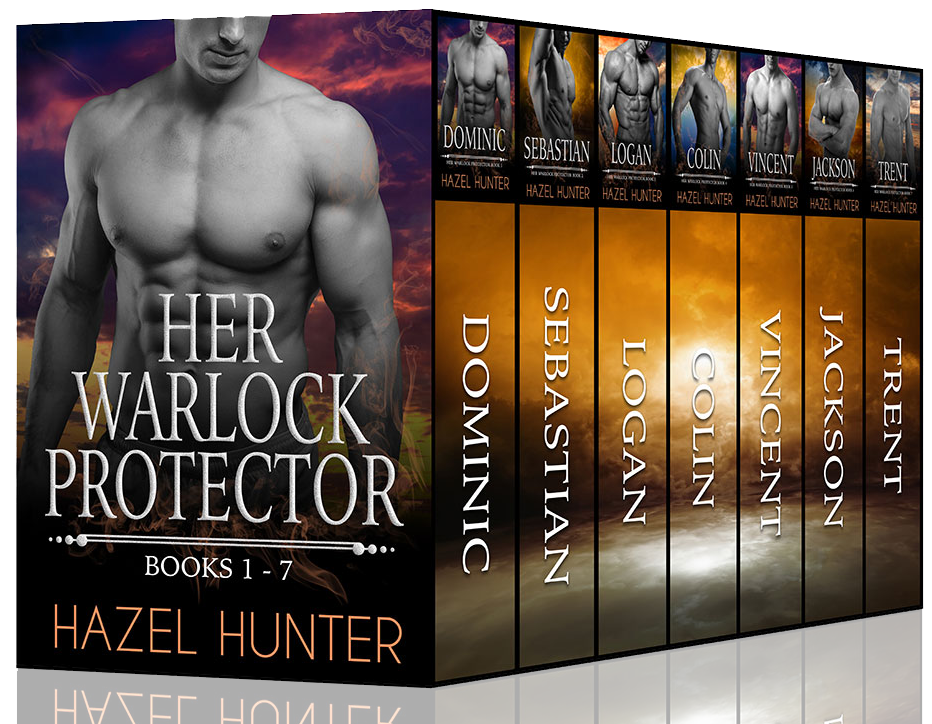 Warlock Dominic Berrett’s mission is to bring novice witches into the Wiccan fold. But Sophia Chambers, who can disappear, doesn’t want his help. Though Dominic would do anything to keep her safe, he can’t protect someone he can’t see. Little does he know that her disappearance isn’t her own doing.

I waited with bated breath for the next installment like a fiend.

I really like the way each warlock goes out of his way to earn the trust and affection of his witch. Wonderful collection.

Well written. 5 stars. Each tale will suck you in and allow you to breathe in another world for a time. Let yourself drift away.

I am so glad these were a set to read. I enjoyed each and every one of them and the order was perfect to read each.

The stories are well written and have unique situations often with a humorous twist.

With each new story I thought this one is my favorite, until I read the next one.

These books are not just about sex (but they are hot, hot, hot), they are about finding love, living and surviving.

It was a perfect summer night, and dressed in her slightly tattered long gray skirt, black tank top and light cardigan, Sophia blended in perfectly with the shadows of the alley. Just a few short meters away, happy couples and cheerful drunks reeled along the sidewalk, completely unaware of the woman who stood in the dark with her smartphone in her hand.

There was no movement in the lit balcony above, and Sophia slouched against the wall, bored, tired and aching. She had been wandering up and down this alley for hours waiting for the shot she needed. Her feet hurt and her head was sore. She thought she would have given anything to be at home, cuddling her cat and watching some brainless television, but Brent had told her to get on the pavement and not come back until she had something good.

There was a scuffing of shoes on pavement, and she shrank back against the wall as a man and woman stumbled into the shelter of the alley. The woman pinned her companion against the brick wall, worrying at his shirt collar with her fingers before leaning in to nibble on his neck.

“Oh baby, baby, you feel so good,” she crooned, and the man murmured something in agreement.

His eyes unfocused as the woman pressed her body against his, but Sophia was surprised to see that he was looking right at where she was standing. For a moment, she wondered as she always did if they knew she was there. Maybe they were only ignoring her out of sheer stubbornness or out of some kind of kinky game. But after five years she knew better.

Her eyes went back to the balcony, which was still sadly empty. Some part of her wanted to give the couple their privacy, though another part of her fiercely envied what they had. She wondered what it was like to want someone so much she was willing to press him against a brick wall, just a little hidden from a busy thoroughfare. She wondered what it would be like to feel broad, strong hands on her hips, claiming her and making her moan.

The couple grew louder, and Sophia shifted uncomfortably. She didn't want to give up her unblocked view of the window, but she also didn't want to witness more than she should of the two who were so obviously enjoying themselves. Just when she was wondering what she should do, the French door to the balcony opened, and a woman in a light camisole and robe appeared.

The woman on the balcony glanced down into the alleyway. She smiled with amusement to see the heedless couple below her. She gestured behind her into the room, and a man in a terrycloth robe came out to join her.

Jackpot, Sophia thought, snapping picture after picture with her smartphone. This is going to be all your wife needs to get that divorce you won't give her, Mr. Turner.

Sophia could practically taste the soup she was going to heat up and feel her cat purring away next to her, but then it all went wrong. The couple next to her was getting increasingly energetic, and the man was apparently feeling playful. He pushed his companion away from him, intent on pinning her against the opposite wall. Unfortunately, that was right where Sophia was standing. Though her peculiar skills at making herself unnoticed were good, they did not survive someone touching her.

The woman cried out. Sophia yelped. And suddenly there were four pair of confused eyes locked on her. Three pairs were simply befuddled by what they saw, but one pair, the one belonging to the man in the terrycloth, saw her smartphone. He knew exactly what she was doing.

“Snooping, spying little bitch,” he shouted, and he disappeared into the room.

The couple who had been sharing the alleyway with her made a hasty departure, and Sophia was right on their heels. She would make it to the street and be gone and unnoticed, safe at home before the man could blink, or at least that was the way it was supposed to go.

Instead, the woman running before her lost a high-heeled shoe, and when Sophia's foot came down on it, her ankle rolled with a stomach turning wrench. She went down hard on the pavement, and for several long moments, she was simply on her side, gasping with pain. Sophia wondered dizzily if she had broken her ankle, and then as the roaring of the man in the robe became clearer, she realized that her ankle was the last thing she should be worrying about. She wobbled to her feet, her ankle threatening to buckle on her again, but she had not made it two feet before the man emerged from a service door and saw her. His meaty hands wrapped around her shoulders. He pushed his face into hers, his mouth open and shouting.

“You little bitch, who the hell sent you? What the hell did you see? Give me that, give me that damned phone...”

Somehow she managed to keep her fingers wrapped around it, but she knew from the way he was scrabbling at her that she wouldn't be able to keep it long.

Brent had always told her that getting out with her skin intact was more important than getting the scoop, no matter how good it was, but her terrified mind wouldn't allow her to let the phone go. Instead, she clung to it and struggled fruitlessly to pull away.

The man roared with rage, and one fist came up. Sophia flinched, but the blow never landed because now there was someone else in the alley with them.

In the dim light of the nearby streetlamp, Sophia could see that the man who had grabbed her attacker's fist was taller than either of them. His frame was large and blocky, and he held her attacker like he wasn't any stronger than a kitten.

“I really don't think that's what you want to be doing,” her rescuer said coolly, pulling the man away.

“What the hell business is it of yours?”

“None whatsoever. And she isn't your business either. Get the hell out of here.”

The man shoved her attacker away, and he waited until the man had vanished into the service door where he had come from before turning to Sophia.

Sophia was still shaking from fear and adrenaline. All she could do was nod and stare.

Now that he wasn't wrestling an angry man off of her, she could see her rescuer, and it was all she could do to keep her jaw from dropping.

He was handsome in a way that she associated with male models and actors, tall and fit. It was easy to see how strong he was. His tight, black T-shirt was stretched over broad shoulders, and the jeans he wore clung to his narrow hips like a second skin. She could tell his hair was light, but not what color it was. Sophia shook her head to stop from gawping like a fish.

“You sure? He was scratching at you pretty hard.”

He reached for her arm to check, and she was surprised that she allowed him to do so. His fingers were long and lean, and when they wrapped around her wrist, she could feel how warm they were.

“Tch. He scraped you up a little, we should get that looked at, huh?”

She was getting ready to reply when the service door opened up again, and her attacker came lunging back out. This time he was holding a steel rod that he had gotten from god knows where, and emboldened by his weapon, he swung it hard at her rescuer's head.

For a horrified moment, Sophia could see the rod making contact, striking the stranger down, but instead, her rescuer turned, hand held up. There was a bright flash of light, a sizzle that was more of a feeling in the air than a sound, and a sudden burnt smell. The man was on the ground twitching, and her stranger stepped away.

Though she nodded, Sophia was convinced that she had seen nothing of the sort in the man's hands.

Sophia stepped away, ready to give her rescuer the slip, but she had forgotten her ankle. Without the adrenaline running through her system, she felt the hot pain shoot along the bone, and she stumbled. She would have scraped herself raw on the brick or took another tumble, but the man was there again, holding her up.

“Whoa, there honey. That's not looking so good. Do you live close?”

She bit her lip, looking up at him anxiously. He had saved her, but she still knew nothing about him. For all she knew, he could be a dozen times worse than the man who was laid out on the ground.

As if reading her thoughts, the man nodded.

“If you like, I can take you to the corner and get you a cab. Would you prefer that?”

Sophia made up her mind, and she shook her head.

As he practically carried her out of the alley, she felt a sense of peace pervade her entire being, something that she was sure she’d never felt before. It felt like the start of something, but of what she didn’t know.