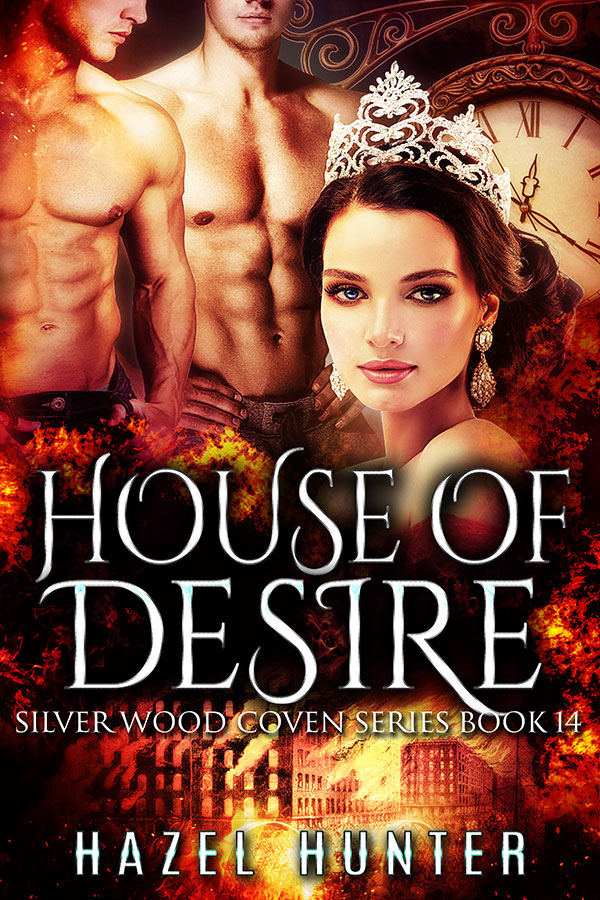 As the race winds down, the heat turns up.

Although the rogue Wiccans have managed to take the first two Fae crystals, two others remains at large. But as Summer’s team lands in 1871 Chicago, they begin with a crisis. Summer lies unconscious from a head wound as Troy and Michael try to get help.

Meanwhile the Templars suspect each other of betrayal, and the Fae member of the team inexplicably disappears. As the date for the Great Fire nears, the fractured team relies on outside help to complete their mission. But the rogue Wiccans have some special help of their own.

I like the new storyline and how they are revisiting famous places and times in history. I am always happy to spend time with Summer and Troy and Michael. This chapter in their story brings more danger and surprises and some answers too. You definitely need to read them in order. Each book is a pretty quick read with a great mix of romance, action and adventure.

Another fantastic Journey back in time, this time to Chicago. Excellent addition to the series. After reading all 14 volumes I'm still hooked and they keep getting better and better!

This book was on fire. It was filled with action, laughter, romance, suspense and maybe even betrayal.

This installment of “House of Desire”, contains one of the most tender intimate interludes in any book I've ever read, and it's not between Summer and her guardian mates!

Another winner episode. Kept me on the edge of my seat and anxious for more.

AS THE HUAXIAN governor’s palace crumbled around him, Michael Charbon lifted Summer Lautner’s limp body from the rubble. Blood from a deep gash on her scalp painted scarlet streaks through her golden brown hair. Her lovely face had paled to a marble white, as if she had been turned to stone by the ceiling panel that had collapsed on her.

The disintegrating room shook violently as another, stronger tremor struck the palace. The worst earthquake in history had just begun, and would completely destroy the city and everything within five hundred square miles. Nearly a million souls would also die. Summer had used her tremendous powers to bring them to this time, but now that she was unconscious they were trapped.

But none of that mattered to Michael. Summer could not die here—not if he could save her.

“Michael,” Troy Atwater yelled. His sentinel brother, stumbled over and swore as he saw their lover’s bloody wound. “Oh, Gods, no.”

Michael looked up and saw their only hope: a circle of shimmering light beyond the toppled throne. The Fae time portal their enemies had used to escape still remained open.

“Troy, take her,” Michael ordered. As soon as the dark warlock had their woman in his arms Michael summoned his Wiccan power over the earth. He pressed his hands against the shattering floor.

“You can’t stop this,” Troy warned.

“I can delay it. Take Summer and the others into the portal.” He channeled all of his power into the ground to hold it together for a few more seconds. “I will follow once you are through. Hurry, Pagan.”

Troy briefly gripped Michael’s shoulder before he shouted for the rest of their team. “Everyone, with me. Now.”

Lemuel Bowers rushed over to the opening in time, and without hesitating the short, fair-haired Templar lunged through it. The circle began to contract as soon as he disappeared. His comrade, the massive and dark Cyrus Shelton snatched their Fae tracker Elettra GemSage off her feet, but waited until Troy carried Summer over and joined them.

The strain of pouring so much power into the fissure opening under the palace began to take its toll on Michael. He felt his muscles burn from the continuous surge, and sweat streamed into his eyes, blurring his vision. Silently he sent up a prayer to the Lord and Lady to lend him just a little more strength.

Troy carried Summer into the shrinking portal, followed by Shelton and Elettra, and they vanished.

Michael eyed the distance to the rapidly-dwindling portal. Using the last dregs of his strength, he launched himself toward it. With the palace collapsing on top of him he leapt the last yard into an opening barely wide enough for his body. Broken stones smashed against his back and legs, and then he was inside utter darkness.

Unlike the jumps through time he had made with Summer, Michael felt a terrible power seize him and fling him across a yawning, airless chasm. The power throttled him like a rag doll, cutting off his air. Several frantic heartbeats later he emerged, slamming back into reality as if it were made of concrete. The first breath he took smelled of rusted metal and kerosene, but at least it filled his lungs and ended the strangling sensation.

“We’re here, Paladin,” Troy said from where he sat holding Summer pressed against his heaving chest.

Around him Bowers, Shelton and Elettra lay sprawled, semi-conscious but alive. Light flashed overhead, briefly revealing the antiquated machine shop around them before the portal’s round, empty silver frame clattered to the ground.

“We’ve some hitchers,” a man sneered, and Michael saw a short, red-haired man snatch up the time travel device.

A badly-scarred, dark-haired woman dressed in a palace guard’s uniform strode toward them, blades in both of her hands.

Troy eased Summer to the floor and shot up, scanning the work benches around them quickly before he grabbed two arm-length pipes and tossed one to Michael. They came together, barring the woman’s path to Summer and the others.

“She’ll have to go through me,” Shelton’s deep voice rumbled from behind them.

Their attacker grinned. “Love your pet Templars. Do you keep them mind-fucked, or are they just naturally pussies?”

“Come here and find out,” Bowers told her.

“Wickerman has lied to you,” Troy said. He brought up the pipe to block the first, vicious thrust of her sword. “Your leader enjoys using women to do his dirty work.”

“Oy,” the short man protested, and thumped his small, narrow chest. “I’m not a bloody bint.”

“When he’s finished, he’ll kill you,” the dark warlock insisted. “Like all the others he’s deceived.”

Michael swung his pipe into her other blade, driving it up to slice across her chin.

“If you give the crystals to us,” the big man said, “we will help you.”

“That’s really sweet of you to offer,” the woman said. She flipped backward, sailing high into the air before she landed atop a table. She kicked two heavy metal parts at Troy and Michael, who had to duck to avoid them. She wiped the blood from her chin. “What do you think, Tryston?”

“I think we’ve half the crystals, darling girl, and their time-jumper coshed a hole in her head. They’re Magus Corps, they’re desperate, and they’re very bad liars.” Her comrade yawned and leaned back against a wall. “Just cut their throats and be done with it, will you?”

She jumped down and advanced again, her blades flashing as she slashed the air between them.

By that time Michael’s eyes adjusted to the darkness. The wound on Jadine’s chin had disappeared, leaving a new, thin pink scar.

She cannot be injured, he thought to Troy through their telepathic link. Her flesh heals instantly,

It won’t if we cut off her head, the dark warlock replied, blocking the slashing swords with grim determination.

“Reality hurts, doesn’t it,” Jadine said as sparks flew from the clashing metal. “Half my scars are from big, powerful warlocks who wanted to kill me. They tried, they failed, they died. Just like you will.”

“Listen to us,” Troy said. “The consequences of what you’re doing will be catastrophic.” He whirled away to avoid her jabs. “Wickerman will use the crystals to destroy the world.”

Michael darted forward to sweep her leg, and grunted as she spun and sliced open his bicep.

“In your dreams? Well, why didn’t you say so?” She drew back a few steps and lowered her blades. “We’d hate to make your dreams come true.”

Michael saw her stance change subtly, realized what she intended, and joined his mind to Troy’s. They both dove to the floor at the same moment that Jadine flung her swords at their chests. The blades buried themselves in the wall behind them.

“You have very poor aim,” Elettra said, reaching up to jerk the swords free. She stepped forward to squint at Jadine. “And the hide of a bad-tempered sow.”

Jadine spun, picked up a pipe wrench, and backhanded it at Elettra. Though Elettra dodged sideways, it clipped the side of her head and sent her staggering backward.

“How’s my aim now, bitch?” Jadine taunted as she snatched up her blades.

The wood floor began to splinter under him. He turned his head to see a cold amber light engulfing his lady. A web of cracks radiated out from under her as stones from beneath the building began erupting through the planks.

“Run,” Tryston shouted, and stumbled to the front entry.

Though Jadine gave the group one last look, she dashed after him.

Michael reached through the corona to lift Summer from the floor, and felt the burn of TerraCairn, the crystal of earth. As soon as she lay in his arms the shaking stopped. The stones that had rammed through the floor began sinking back underground.

“Charbon,” Elettra said. “How could Summer do that?” she asked as she rubbed her shoulder. “They have all the crystals.”

Shelton spun Elettra around. “Are you mad? That evil wench might have broken your thick head.”

The Fae woman scowled up at him. “And you would not have stopped her?”

“Enough bickering,” Troy said, as he checked Summer’s throat. “I don’t think she did anything. She barely has a pulse.”

The big Templar shoved Elettra aside and looked down at Summer’s pale features. “When the glowing started,” he told Michael, “it came pouring out of that head wound of hers.”

“We need to get to help.” Troy went to scrub a dirty window pane to look out. “It’s dark but I can see the lake, and the old railroad tracks.”

He reached to his waistband and retrieved a crumpled piece of paper. But when he unrolled it, Michael recognized the scroll that Artephius had given him in Boston.

“There’s a Magus Corps station disguised as a hat shop on Michigan Avenue,” Troy said. He tucked it back into his clothes. “I think we can walk to it from here.”

Michael tightened his arms around Summer. “Lead the way.”