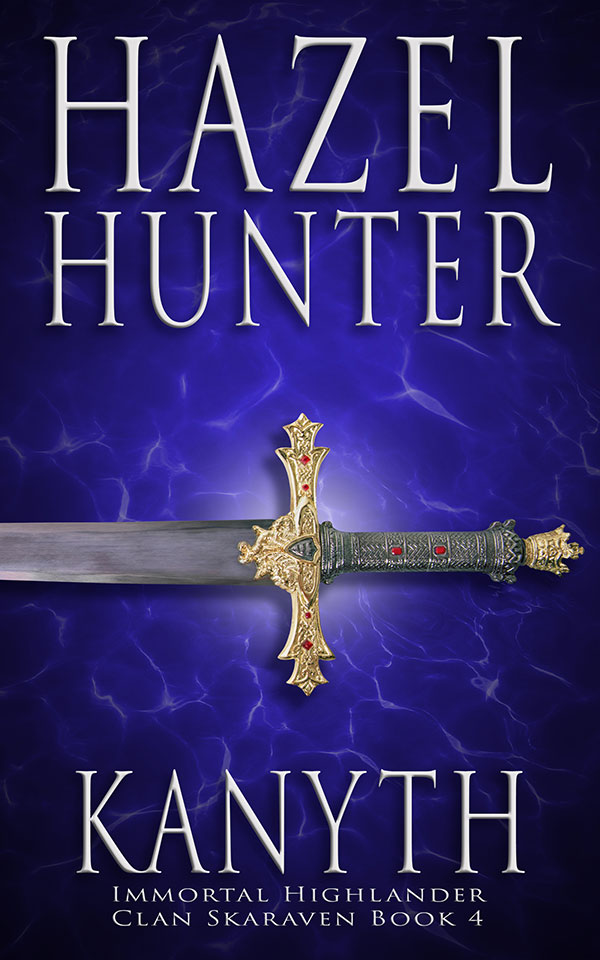 Can a druidess with the power of visions be blind to love?

Weapons Master Kanyth Skaraven has always found favor with the ladies, until he meets Perrin Thomas. Though the fairy-like druid descendant seemed fated for him, he finds himself torn in two directions. His unique power with the forge is something he must keep under tight control—a control that slips when Perrin is near.

Dancer Perrin Thomas can’t find her purpose in medieval Scotland. While her fellow women from the future work to aid the highlanders, Perrin’s visions have vanished. Without her gift she struggles to help and is at a complete loss when it comes to the gorgeous Weapons Master. It’s obvious that he can barely stand to be near her despite her inexplicable longing for him.

But as the deadly attacks of the mad druids and their giants escalate to a fever pitch, Perrin and Kanyth must master their deepest fears as well as their desires.

Hazel Hunter did a fantastic job with this book. Once again I have been transported back to medieval Scotland and shared in the characters fears and happiness. This ties in perfectly with the rest of the Clan Skraven books.

After an argument with Kanyth she finds herself marked by his battle spirit as his mate. Then sparks literally fly. Too fun watching them work this out.

Loved this one. The series keeps on getting better and better. I loved the complete turnabout for Perrin including her behaviour, and Kanyth is a sweetie. Beautifully written and constructed, this book was impossible to put down.

The characters are well written and complement this fast paced plot. There is action, adventure and suspense, you'll keep turning pages until the end. I'm looking forward book 5.

I was completely carried away to this world and it was a real delight.

THE FIRE HAD gone out again. No wonder Perrin Thomas’s hands and feet had turned into lumps of ice. Even before she’d been starved half to death she’d always gotten chilled easily. In her own time, she would have had central heat, an electric blanket, cuddly pajamas and fuzzy socks to keep her warm. Here in the fourteenth century she had a scratchy wool blanket, borrowed clothes that felt like burlap, and an ancient fireplace that wouldn’t stay lit.

Rowan would know how to build a fire with two rocks and some twigs. And keep it burning. In her sleep.

Perrin had always depended on her strong, capable younger sister to handle any sort of trouble, but she couldn’t do that anymore. She’d told Rowan she could take care of herself. Here in the subterranean refuge of Dun Mor, the hidden stronghold of the Skaraven Clan, she was on her own.

“I can do this,” she muttered as she pushed herself out of bed. She yelped as a sharp piece of straw poked up through the ticking and scratched her backside. Jolting to her feet, she turned and swatted the mattress. “Stop attacking me.”

Outside in the hall heavy footsteps thudded, and the door to her chamber burst open. The big, dark-haired man who came in held a longsword only slightly less intimidating than the fury in his black eyes. The tightly-muscled wall of his bare chest heaved as he scanned the room, and then regarded her.

“Indeed.” Slowly the clan’s weapons master lowered his blade as he peered at her. “Show me this wound.”

“Brennus sent me to guard you,” Kanyth said as he sheathed his blade and loomed over her. His powerful body heat enveloped her trembling form in an invisible embrace. “Show me where you’re hurt, lass, that I may comfort you.”

Unfortunately, nothing about the big man made that possible. Up close he smelled of hot cinnamon and cloves, as if he sweated spices. She’d never seen such a perfect face on a guy, as though he’d been laser-sculpted from some flawless marble. His hair fascinated her, like some mass of polished onyx mysteriously spun into midnight threads. A faint blue light glowed along the lines of the primitive tattoos on his chest. Perrin felt herself swaying toward him and stumbled back another step.

“I’m comfortable,” she said, her voice tight. She gulped as he put his big, scarred hands on her shoulders. Now he was touching her, and she shook so hard she’d probably break into a million pieces. “Really, I am.”

“I think no’,” Kanyth murmured. “You’ve naught but yourself here…and me.” He moved one palm down the length of her back, and then cupped the stinging curve of her scratched buttock.

“Um, okay,” she managed to whisper. The sensual caress made her skin heat up until she thought she’d combust. But wait. What was that sound? Was she moaning? “Please, what are you doing?”

“All that you secretly desire,” Kanyth crooned as he leaned down, touching his lean cheek to hers. “For you’re my wench.”

He kept saying that but he began shaking her.

“If you dinnae awake, wench,” a much deeper, annoyed voice said, “I’ll call the shaman to pour one of his wretched potions down your gullet.”

Perrin’s eyes flew open to see a brightly-burning fireplace, a bowl of porridge under her nose and a frowning rugged face hovering over her. It took a moment before she realized she’d dozed off again.

“Yes? I mean, yes. I’m comfortable. I mean, very cozy.” Ignoring whatever was still stabbing her in the butt, she beamed at the Scotsman. “I’m fine.”

“Oh, aye, for a hank of hair and bones,” Kelturan said. The Skaraven’s chief cook, fussed with the wool blanket covering her legs before he pushed the bowl into her hands. “Eat, or I shall toss you in my pottage kettle.”

She nodded and even took a spoonful to satisfy the grouchy cook, although it tasted like lumpy paste. Once he trudged back to the kitchens she glanced around to see if anyone in the great hall was watching her. Dozens of big Skaraven warriors sat quietly eating around the enormous table shared by the clan for meals. Armed sentries occupied positions by every entrance, their eyes watchful. Three more towering men stood listening to Brennus, their chieftain, who appeared to be issuing orders.

Perrin set aside the porridge and started to relax until she saw the silhouette of the man standing by the back wall, the one who looked like a polished, refined version of the chieftain. He had the same glittering black eyes, and he was definitely watching her, but not in a protective, I’m-guarding-you way. No, Kanyth Skaraven always looked at her as if she were an uninteresting child. Which, considering the fact that he was an immortal highland warrior with some sort of scary superpower no one talked about, seemed apt.

Oh, God, had she been talking in her sleep? What if he’d heard her? Or everyone had? She’d die of embarrassment. Just die.

Her face flooded with painful heat as she ducked her head and reached under her hip. She pulled out Emeline McAra’s wooden knitting needles, and what appeared to be a scarf the nurse had been knitting. She hadn’t looked in the chair when she’d come up from her room and sat down by the fire to warm her frozen feet. At least that explained part of the dream.

Perrin tried to eat a little more of the pasty porridge, but the familiar morning headache began to pound inside her skull. Absently she rubbed her temple, wishing she could get over the caffeine withdrawal. She’d always needed at least two cups to wake up properly, but the nearest Starbucks was seven hundred years away. Of all the reasons that tempted her to go back, vanilla latte sat at the top of the list.

Perrin froze and looked up into narrowed black eyes. She had to say something to Kanyth or he’d make a fuss. Then everyone would come over and she’d be the center of attention. Again.

The weapons master crouched down to her eye level. “Lady Althea told us you’ve visions of what shall come. Have they again begun?”

Of course, her former ability to see things in the future would be the only reason Kanyth spoke to her. But the visions hadn’t come since Lily had conked her on the head to keep her from doing something brave and stupid. She should tell him that her ability would probably never work again. But no, instead she sat like a silent lump in front of the man, who looked even more gorgeous close up. Too close for Perrin’s personal space issues, her shyness locked up her throat and threw away the key.

He scowled. “Shall I summon Ruadri?”

Perrin would talk to Kanyth, right now, because this was ridiculous. She took in a deep, slow breath as she tried to calm down. She should have gotten over this exasperating anxiety years ago. A grown woman who had survived being yanked back in time by crazy magic people and their horrible abuse and weeks of starvation should be able to speak a couple of words. Especially to one of the nice men who protected her now. Only he was leaning in now, and she’d squeak or stutter or make him believe she was even more of a nitwit than he thought.

She cringed back and shook her head.

Kanyth stood, looking as frustrated as she felt. “Mayhap you’d feel easier with one of the ladies.”

I’d feel better if you held my hand and waited and let me breathe through this, Perrin thought. Then maybe I’d tell you that I want to do something to help find the mad druids. I know how much you and the clan need to stop them, and make sure they can never hurt anyone again. Or maybe I’d tell you that I’ve been dreaming about you every time I close my eyes. And that’s really scaring me, because maybe the visions have come back, but as dreams, and you’re part of them. Or maybe I’d say that somehow I’m meant to be with you. But that would mean you’d have to want me instead of looking at me like a boring kid.

All she could do was shake her head again. 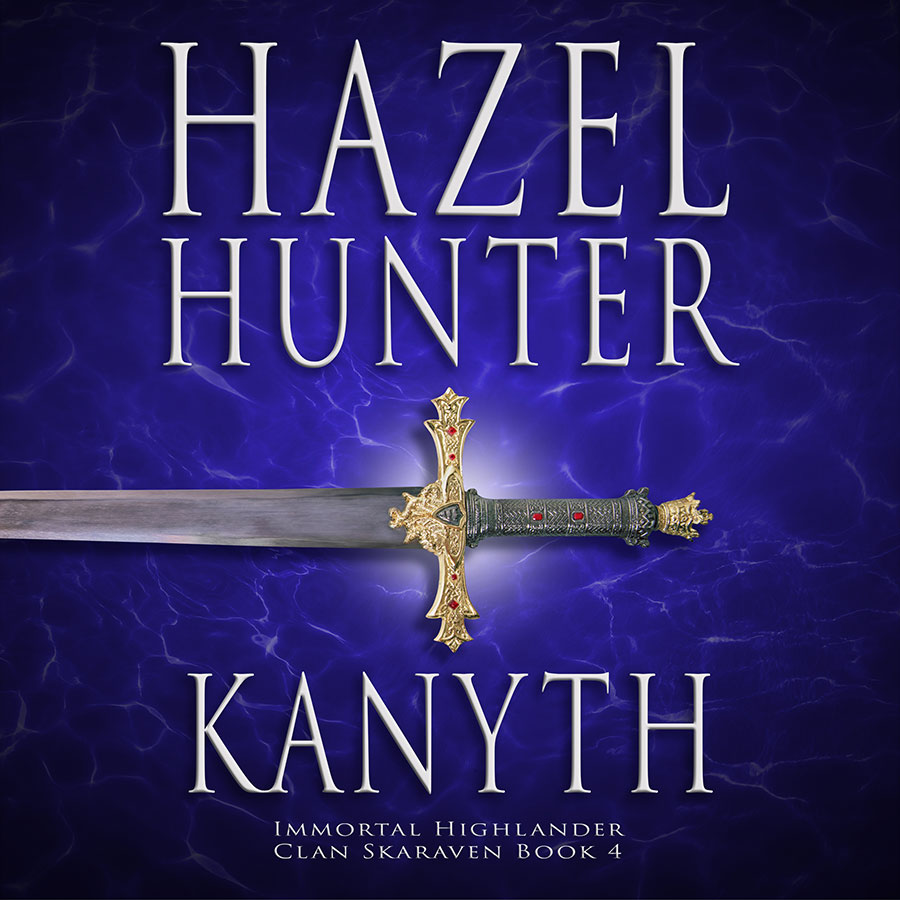 Kanyth is now available on audiobook from these online booksellers:

Warning: Use cheap headphones. They're about to melt.
The Sizzling Sample (NSFW)
The Retail Sample