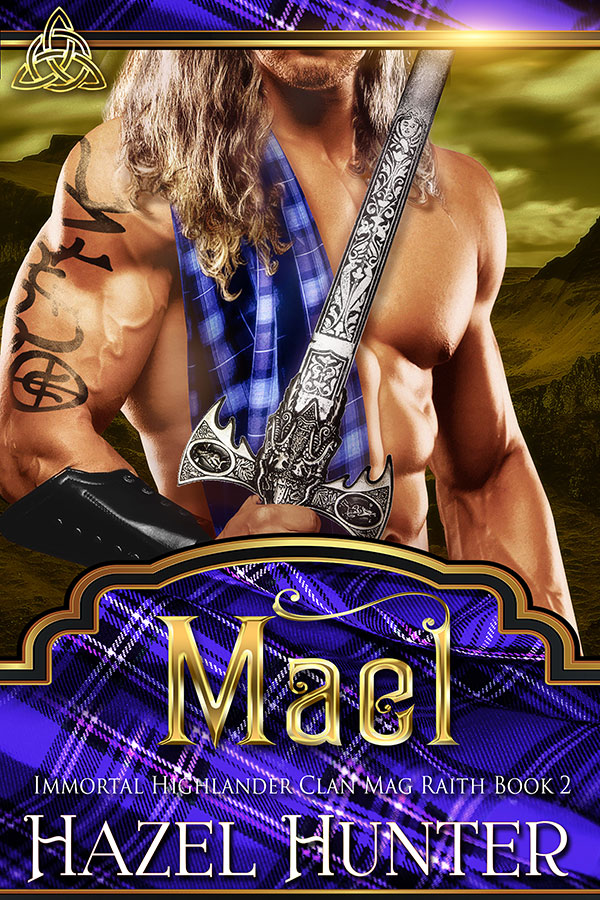 When an Englishwoman lands in medieval Scotland, quite literally on a massive highlander, she demands some answers.

Rosealise Dashlock is not messing about. In her no-nonsense way, she wants to know the name of this Scottish warrior, why they share the same tattoos, and what mysterious force immediately draws her to him.

Mael Mag Raith may be the clan’s gentle giant, but he finds his patience sorely tested with Rosealise. Though he would do anything to protect the beautiful lass, she has a will of iron and a talent for getting her way.

However as the clan tries to sort out her appearance, their enemies do not rest. Druid kind and Sluath now hunt the Mag Raith together, both all too willing to do whatever it takes to succeed.

Wish I could give it 10 stars.

They really make for a great couple and she never stops challenging him.

Her arrival was spectacular (in my view) and something I've been wanting to read in a book for quite a while.

It's official, I have a new favourite story in this series. Mael and Rosealise's is fantastic. Jealousy between brothers added into the mix, lots of romance, action and manipulation in this one. Beautifully crafted with great characters and excellent research. This one reads like a dream.

If you’re looking for a book filled with love, light, darkness, evil, and magic then this is the book you are looking for.

It takes a great story teller to develop a love story in this kind of setting, but Hazel does it.

The unusually warm spring in Scotland had festooned Dun Chaill in flowery vines and ample shade from the flourishing trees. Moss now so thickly carpeted the forest surrounding the castle ruins it had begun creeping up the tumble-down stonework. Daily washed by lavish morning dew, the air smelled like a coddled maiden, soft and sweetly fragrant.

After laboring for weeks to make habitable the intact portion of Dun Chaill’s keepe, Mael had quickly agreed to help his chieftain reclaim the kitchen garden. While he had no skill with planting, all of the men had tired of foraging in the sprawling forests. Soon they would need more to add to their limited food sources. The prospect of working outdoors had cheered him as well, for how hard could it prove?

What he should have done, Mael thought as he stood buried to the hips in greenery gone wild, was first have a look at the tangled undergrowth.

“’Tis hopeless, Chieftain,” Mael said, grimacing as he pried a spiky thistle from his sleeve. “I say we burn and plant anew.”

“You’ll tell Jenna she cannae have fresh strewings until the solstice,” Domnall mag Raith said as he waded through a white-spangled snarl of hawthorn and meadowsweet. “She ever finds new ways to scatter the sweet herbs for their scents.” Standing almost as tall and broad as the tracker, the chieftain looked just as incongruous. “Then bid Edane seek elsewhere wood sorrel for his tonics, and Broden sweet berries for his snares.”

“I’d rather beg the Gods smite me.” Mael eyed a patch of sky. “Why didnae I remain in the hall to muck out the hearths? ’Tis humble work, and yet can be finished well before the snows arrive. This?” He shook his head.

“’Tis no’ so bad. ’Twill need but taming and tending.” Domnall surveyed the uncultivated growth around them. “We should ken the range of what may be saved.”

“I’ll trodge to the back.” Mael peered over a snarled spread of purple blooms before glancing down at the hundreds of pods they’d sprouted. “’Twould seem we willnae want for seed, but I reckon I’d rather eat dirt.”

The chieftain grunted. “’Tis good horse fodder, vetch.” He reached down and plucked a blushing rose from the undergrowth, a rare smile lighting up his tough features. “We must save some flowers for my lady.”

Pushing through the tall grasses until he cleared them, Mael tried to stave off the familiar stab of envy. Since mating with Jenna Cameron, Domnall’s nature had vastly changed. He no longer retreated into icy indifference and bleak silences. While they all labored in various ways to improve their situation, the chieftain had worked tirelessly to transform the abandoned stronghold. He meant to make it become a true home for his wife and his men. Mael had no doubt that all of it sprang from the deep, abiding love Domnall had found with Jenna.

’Tis their reward for all they’ve endured, this life they build.

Mael had no illusions about his own future. He’d inherited his defender sire’s massive build and outlandish strength, and looked every inch a brute. While some females regarded his size as proof of his virility, none could gaze upon him without a shiver. The lasses of his tribe thought him the same as Fargus mag Raith, who had nightly vented his endless rage on his mate and bairns.

Unlike his sire Mael had always been of a mild, thoughtful temperament. Indeed, he’d often thought it a punishment from the Gods for pairing his cherishing nature with such a fearsome appearance.

Beyond the vetch he found wild carrots and turnips paving the ground with lacy cups and broad fronds of green. The plentiful roots would add flavor to their pottages, and even feed the mounts when grazing grew thin in the cold season. Yet when Mael lifted his gaze he saw they had crept out from under an unkempt hedge of juniper that stretched in an enormous curve that seemed to have no end. Even more puzzling, behind it he could see the top of a wych elm hedge and another of blackthorn growing behind it.

“Chieftain,” he called to Domnall as he looked down the long wall of spiky leaves and berries. “We’ve more than we reckoned back here.”

That night when they gathered in the hall for the evening meal, Mael described the tangled area to Jenna Cameron, who nodded.

“I’ve seen that place,” she said as she passed a platter of oatcakes to her mate. “It looks to me like an overgrown hedge maze.” She paused as she took in the blank looks the rest of the men were giving her. “That’s a garden labyrinth made from shrubs or small trees trimmed to serve as walls. But they date back only as far as the Renaissance—ah, the mid-sixteenth century—so I’m probably wrong.”

Mael didn’t doubt her, but something about the carefully planted hedges set his teeth on edge. “And if you’re no’, lass?”

“’Twas likely meant to catch and end the unwary,” said Broden, his handsome face set in its habitual scowl, “like every other facking thing in this place. No matter what ’tis, we should burn it.”

Gleaming red braids bobbed as their archer, Edane, nodded. “Aye, spread flames in the midst of all that deadfall and blowdown. We’ll clear at least the forest and the ruins before the smoke summons the Sluath to descend on us.”

“Let them come.” The trapper drove his eating dagger into the top of the trestle table. “We ken how to kill them now.”

Kiaran dragged a hand through his red-gold mane, making the kestrel on his shoulder fly off to join the other trained raptors perched in the rafters.

“We’re five against a horde of demons,” he retorted. “Aye, surely we’ll prevail.”

“Enough,” Domnall said, bringing an end to the argument before it’d begun in earnest. He met Mael’s gaze. “As seneschal the grounds as well as the stronghold shall be your domain. What say you?”

Mael was a little startled to be given the position as well as the say, but it seemed sensible. Since boyhood he’d shared the work of his máthair and sisters, and had the nature best suited to managing this unruly household.

“’Tisnae a present threat to us,” Mael said after giving it more thought. “I’d clear the garden first. Take stock of the maze after, and learn if ’tis safe or no’.”

Broden snatched up his food, mumbled something like an apology to Jenna, and stalked out.

Edane made a rude sound, caught Domnall’s eye, and then turned his attention to his trencher.

After they finished the meal, Domnall lingered to help Mael bank the hearth and take apart the trestle table. When not in use they hung it on wall hooks.

“I might have first asked you to serve as my seneschal,” the chieftain said.

“You never ask, for you’re never wrong.” Mael grinned at him. “’Tis facking annoying. Dinnae keep your lady waiting so you might smooth my feathers. You plucked them all, long ago.”

“Still, Brother.” The chieftain inclined his head. “My thanks.”

Mael watched him stride off in the direction of the chamber he shared with Jenna. The thought of seeking his own empty bed didn’t appeal to him, so he took down a torch. There weren’t enough men to stand regular sentry, but he could patrol once around the ruins. It might tire him out, and keep him from staring at the wall cracks for half the night.

Outside the great hall he navigated the warren of dark, cluttered passages from memory until he stepped over the rubble of the inner ward’s back wall. Beyond it lay the front of the wild garden. Earlier he and Domnall had cleared a narrow foot trail. As Mael lifted his torch to it for a better view, a sudden, chilly wind blew down it. A distant, booming sound, like echoed thunder seemed to come from the ridges, as well as a strange, stuttering, metallic noise.

Scowling, Mael held the torch higher and surveyed the surroundings. Could the wind have knocked something down? The fluttering torchlight showed only the same overgrown garden and tumbled down stones. A glance at the dark and starless sky revealed nothing as well.