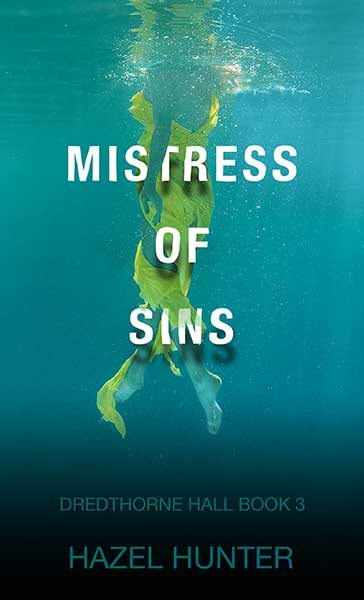 Unless Miss Jennet Reed attends the All Hallow’s Eve masquerade being held at Dredthorne Hall, her family will be cursed forever.

Or so her frantic mother insists after receiving a threatening note. Jennet knows itss utter nonsense, but to appease her mother, she agrees to attend. It’s a lavish affair and a lighthearted evening until an unexpected guest arrives.

Baron Greystone, who inexplicably deserted Jennet at their wedding altar seven years ago, has returned. Though Jennet refuses to give his astonishing story any credence, her heart does otherwise. Only when lethal visitors follow in his wake does she begin to believe him.

OMG!!!! I loved William and Jennet, their banter back and forth, their chemistry sizzled.

Her characters come to life and jump off the page and straight into your head and heart.

Secrets and mysteries abound in this third book about Dredthorne Hall, and I certainly wasn’t expecting the final twist in the storyline.

Hazel Hunter has outdone herself with this series, I have thoroughly enjoyed reading it. But I do think this final book was my favourite. It is so tangled up with twists and some very surprising turns.

This is a fantastic conclusion to the trilogy. I completely fell down the proverbial rabbit hole with this one. Great characters, a bit of spice and tons of suspense. I love the strong female characters.

The third book was the best of all. What a great ending to the trilogy.

A familiar shriek from outside the sitting room made Jennet Reed set down her tea cup and watch the door, resigned to the knowledge that it would soon fling open. Outside the window providing pale sunlight for her morning tea, curls of dying leaves drifted past on a brisk October breeze. All around Reed Park the gardeners would spend the day clearing out the last of the sparse garden beds and gather bulbs for winter storage. Since rising early usually allowed Jennet to enjoy her cozy spot alone for the first hours of the day, she felt rather annoyed.

Rapid footsteps followed the cry, and then Margaret Reed entered with the speed of a woman being hounded by an angry mob. Short, plump and swaddled in a pink velvet dressing gown, she clutched a crumpled paper, which she waved like a flag of frantic surrender.

“Oh, Jennet, oh my dear.” Her mother’s loose silver-blonde ringlets bobbed wildly around her pale face as she hurried over to the settee, enveloping it with her violet scent. “I found the most detestable missive in amongst the notes and cards that came yesterday. We will be cursed.”

“Again?” Jennet drew Margaret down beside her and took the note from her trembling hands. She read over the brief, unsigned message before she looked into her mother’s terrified pale blue eyes. “Mama, this is an invitation. Someone wishes me to attend an All Hallows’ Eve masquerade at Dredthorne Hall.”

“It says that a curse will be cast over us.” Her mother stabbed a finger at the paper. “Unless you go to that monstrous place on that evil night, where I am sure you will be murdered, and I left to die in my old age, bereft and alone.”

“Nonsense.” That pronouncement caused Margaret to burst into tears. Jennet sighed and searched for her handkerchief.

Allowing her mother to weep for a few moments seemed judicious; Margaret had always been highly-strung and easily distressed, and after an uneventful month likely needed the respite. Once Jennet heard the first hiccup of abating sobs she gently mopped up her mother’s tears and made her a cup of too-sweet tea. Then she tackled the contents of the note.

“No one wishes us ill, Mama,” she assured Margaret. “Curses are not real, you know this. Mr. Branwen explained that to you in great detail when we broached the subject with him.”

“What could a vicar know of the misery that haunts our name?” her mother demanded, wringing the now-damp handkerchief. “Has all of his family died while still young? Did he lose his dear Papa even before he was born? Was he abandoned at the altar on his wedding day?”

And there, Jennet thought, was the story of her life in just three questions. Aside from her and her widowed mother, all of their family had died, most of them in their prime. Margaret never cared to be reminded of the reckless, stubborn streak every Reed possessed along with the family’s auburn tresses and green eyes.  That tempestuous flaw had contributed to those early demises, including her father’s.  He’d gone off to die fighting the French only a few months after marrying and impregnating Margaret.

No.  Jennet would not think about the most ridiculous chapter in her own rather dull saga. She had sworn never to waste another moment thinking about that bounder, that scoundrel, that deceitful, heartless beast of a man.

“Mama,” she said, using a firm tone she usually reserved for cheeky footmen and over-curious villagers, “We are not being cursed. I daresay it is a joke in poor taste, nothing more.”

“Who would do such a monstrous thing?” Margaret demanded.

“Someone who wishes me to attend so that I might amuse their guests.” Jennet already suspected just who that might be. “I imagine they wished to make the invitation seem appropriate to the occasion.”

“By cursing us?” her mother shrieked, and then pressed her hand to her brow. “Oh, this will end me now, surely. My head pounds with such violence. Where is Debny? She must send for Dr. Mallory before it is too late.”

Since they had reached the second act in Margaret’s hysterics, Jennet eyed the door again.  Her mother’s lady’s maid came in a moment later, as Debny knew to wait in the hall until she heard her name needed.  With the skill of much practice she coaxed Margaret upstairs to her bed chamber. Her assurances of a soothing tisane, a headache powder and a summons for the village doctor did much more than Jennet could to calm her mistress. Their housekeeper then came in to apologize for leaving the post unattended; she had been in the kitchen going over the week’s menus with their cook.

“Do not blame yourself, Mrs. Holloway,” Jennet said as she folded the invitation and tucked it in her reticule. “Mama hasn’t been distressed for at least a fortnight, so she sought an excuse.  Do ask Cook to prepare some light broth for her luncheon, and keep the herbals brewing until the doctor arrives.”

The housekeeper nodded as she handed over the rest of the post. “I beg your pardon, Miss, but the butcher’s lad mentioned that the Tindalls returned from London yesterday.”

“That is welcome news.” And a chance to escape her mother’s latest bout of agitation,  Jennet thought as she rose from the settee. “Please have Barton to ready the rig.”

After looking in on her mother, Jennet changed from her morning muslin to a dark green walking dress, and donned a brown hooded wool cloak. While not as fashionable as a spencer jacket, the cloak would keep her warm on the chilly drive over to Tindall House. Margaret would scold her for dressing and driving herself, but Jennet preferred self-reliance over playing the genteel lady. Besides being cursed and jilted at the altar, she had now reached a spinster’s age of seven and twenty. No one besides her mother much cared what she did.

Going to the Tindall estate gave Jennet time to enjoy the palette of autumn, which had painted most of Renwick in myriad fiery colors.  The fields remained green, and patches of white and purple heather daubed the hillsides, but the trees had gone crimson, gold and apricot.  Some of the largest oaks and ashes looked as countless tiny flames blazed from their branches .  Despite the damp chill of the morning air, Jennet preferred this time of year to any other in the countryside.  Summer’s bounty had been harvested, and the snows had yet to arrive.  It seemed the perfect season.

That was why you chose to marry in October, so the church could be adorned in autumnal splendor, to match your garnet hair and witch’s eyes.

“I did not marry,” Jennet told the errant thought as she guided the horse up the winding drive to her friend’s home.  “I am not a witch.”

You bewitch me, a deep voice chided from her memory.

Once more Jennet saw herself in her wedding gown, standing in the church while a younger Mr. Branwen comforted a noisily weeping Margaret and hundreds of guests whispered and stared at her.  She had been like a pillar of salt, frozen for all eternity halfway to an empty altar where her marriage would not be taking place.  Later she would feel the humiliation, the despair, and the deep and abiding hatred of the man who had so thoroughly ruined her.  In that moment, however, all she could think was how she had never anticipated this, not once.  She believed she had been loved as much as she had loved.