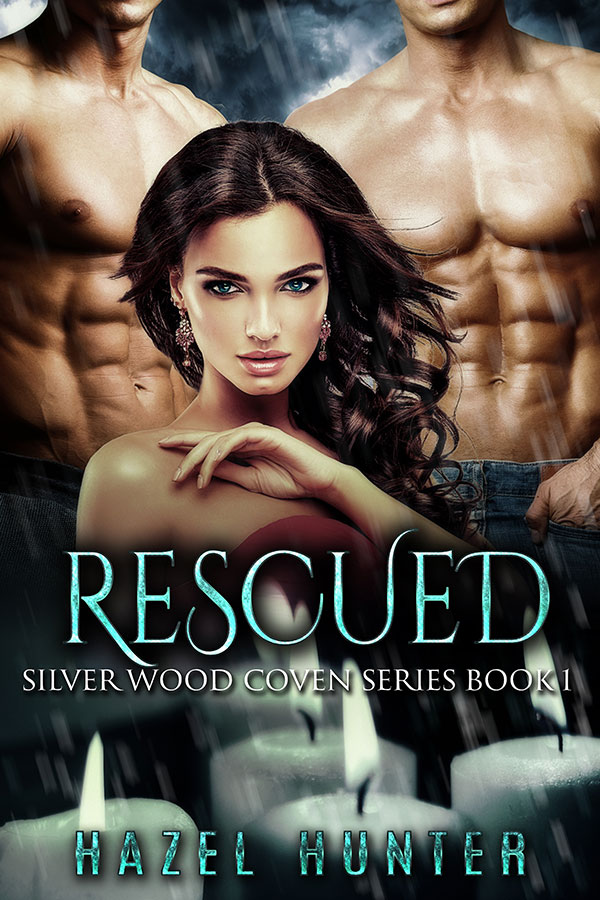 What if you had no memory? Not even of being a witch.

Templar Michael Charbon has been watching the young witch for months. Homeless, beautiful, and living in Central Park, she seems to charm everyone she meets. They shower her with kindness, and yet he never witnesses magic. Only when he rescues her from a rapist, does he understand why: Summer has no memory, not even of her real name. Though he barely resists her inexplicable pull on him, he would gladly break his vows to make her his own.

Magus Corps Major Troy Atwater is surprised to hear from Michael. But their long past together puts Michael’s word beyond doubt. Troy collects the beautiful, young witch from the Templar, before her strange attraction drives half of New York wild. A powerful warlock in his own right, Troy manages to veil her seductive appeal, so that he and the coven can help her. But a passionate bond quickly envelopes them that goes far beyond her charms.

For her part, Summer’s head is swimming. With barely a memory, she can hardly comprehend the ancient world of Wiccans and Templars. More than that she finds herself torn between two very different men. But as the extent of her powers reveal themselves and her deadly past returns in painful snippets, she finds that she isn’t meant to choose between Michael or Troy. She must have them both.

The story line, characters and steamy sex scenes will leave you wanting to drop real life and just read the day away!

What a well-written book. I really love the way Ms. Hunter draws you into the story. I really could not put the book down; I read it in one sitting…You really need to read the book.

Lost, no memory and a hot guy to save you. What more can you ask for? How about two hot guys to save you. What a great start for a series. Intrigue, drama, hot men, who are kind and caring – you bet! Love this series. Hazel has done it again. Highly recommend for romance and paranormal readers.

This is my first book by Hazel Hunter and after reading “Rescued” it will not be my last! Excellent paranormal mystery romance. It was exciting and the mystery around the woman “Summer” is awesome.

Love this unique and ingenious story. Read in one sitting. Catches your attention from the first paragraph. Has everything to entertain and keep you wanting more. Intrigue, fascinating story line, good versus evil that is not black and white and of course sex and strong sexual tension. Can't wait to read the rest of the series.

“EXCUSE ME, MISS,” a man with a rasping baritone said, “but can you tell us where the secret gardens are?”

Summer looked up from the dog-eared paperback she was reading to smile at a pair of elderly men sporting cameras and a Central Park guide book.

“They’re not really a secret. This is the Italian garden, and the English and French gardens are on either side.”

She pointed in the appropriate directions.

“No, Arthur, you said if we went too far north we’d get mugged,” his taller, rail-thin companion chided, and winked at Summer. “You come here often, young lady?”

Summer couldn’t tell him she actually lived in Central Park.

That they were blooming in late fall under a slate-gray sky that promised frost before midnight was something else she couldn’t explain.

Arthur raised his camera to snap a shot of the vibrant pink peonies clustered around Summer’s bench while his companion made a show of breathing in the crisp, flower-scented air.

“I can’t believe how gorgeous it is here, Jimmy. Miss, how do they get all this stuff to bloom so late in the year? It’s October, for crying out loud.”

Summer felt an odd but familiar tug in her chest, and hoped ignoring it would make it go away for once.

“The people who look after the park do a wonderful job,” she said.

Jimmy’s face wrinkled with concern as he nodded at the battered backpack next to Summer. “You all right, sweetheart?”

No, it seemed it wasn’t going away. It would never go away.

“I’m fine,” she lied as she stood and slung the backpack, which contained every possession she had in the world, over her left shoulder. “I hope you gentlemen enjoy the gardens.”

“Wait,” Arthur said. Now he looked worried as well, and dug into his trouser pocket. “You look like you could use something to eat. Here.” He took a ten-dollar bill from his wallet and offered it to her. “Have lunch on me and Jimmy, okay?”

Summer didn’t want or need to take his money, but arguing with him would only make things worse.

“That’s really kind of you, thanks.”

She tucked the bill in her back pocket and smiled at them  before making a hasty retreat, glancing back once to see both men no longer watching her.

The strange pull she felt in her heart had already faded away. She wished the weird things that happened when she felt it would, too. Something about her drew complete strangers over to talk to her, and when they did they always offered help. They seemed obsessed with giving her things, too. Inside her backpack she had two jackets, seven hats, and innumerable packets of gum, granola bars and breath mints. She also had almost three hundred dollars in fives and tens. Even hard-hearted native New Yorkers, who were skilled at ignoring the homeless and needy, came to her. They offered to help her find everything from a job to a safe place to sleep. At least she now had the latter, thanks to a puppeteer. He’d insisted on giving her the spare key to the little cottage where he put on shows with his troop during the day for kids.

“You know it’s illegal to stay in the park at night, and now there’s some pervert going around raping the women he finds here after sunset,” he told her as he pressed the key into her hand. “In this cold weather you’ll need the shelter, too.”

It had been increasingly difficult for Summer to dodge the nightly police sweeps, and find spots to sleep where she wouldn’t be noticed by them or the criminals who crept in after dark looking for victims. She was particularly concerned about the rapist, who had already assaulted four women over the last month and had nearly beaten two of his victims to death.

Despite the offer of safe shelter she couldn’t help asking.

“Why are you doing this? How do you know I won’t steal anything?”

“You wouldn’t,” he said, with the assurance of someone who had known her all his life. “Not a lovely girl like you. Now come on—I’ll buy you a hot dog.”

Summer didn’t know what to do about her effect on people. She certainly wasn’t doing it on purpose, and with the thousands of visitors and locals that came to Central Park every day she couldn’t avoid people altogether. She also couldn’t leave the park because she had nowhere else to go. Refusing to take what anyone offered her made them even more insistent—to the point they wouldn’t leave her alone until she did. One boy from the Bronx had followed her around the park for hours, tearfully pleading with her until she finally accepted the brown bag lunch he’d been carrying. As soon as she had taken the bag from his hand, however, he went on his way, whistling cheerfully.

It’s almost like a relief for them to help me, she thought, and then they seem to forget about me the moment after they do. But why?

Summer walked back through the Vanderbilt gate to Fifth Avenue and turned south to take the long walk to the 79th Street Transverse, which crossed the center of the park. After three months she felt as if she knew every inch of the eight-hundred-plus acres of New York City’s biggest nature retreat. She also loved the Conservatory gardens with a passion, now that they seemed to be returning.

Why the gardens had come back to life was another mystery. Since Summer had begun spending most of her days in the northeast corner of the park, which was not as popular with visitors, it was as if fall was reversing itself. The lawns, shrubs and trees had grown greener and more lush, and flowers had begun blooming again. As with the generosity effect she had on strangers, Summer didn’t want to believe she was responsible. Then she had sat down to read on a bench covered in red and brown leaves, and when she got up to take a walk an hour later she saw that all of leaves nearest to her on the bench had turned green.

Suddenly the hair on Summer’s nape prickled, and she slowed her pace toward the Miner’s Gate. For weeks she’d been convinced someone was watching her. But whenever she looked around she could never catch sight of who it was. Although she knew she should have felt frightened of being secretly watched, whenever she sensed the watcher she felt warm and safe, as if she were being guarded instead of stalked.

Summer had hoped she might cross paths with someone who knew her, but if that were the case why didn’t the watcher come and speak to her?

A laughing toddler running after a bouncing ball scurried past Summer and appeared to be heading straight into the busy street after it. As she turned to chase after the little girl, a tall, broad-shouldered man climbed out of a sleek black sports car. Watching him scoop up the child and her runaway ball with one arm made Summer stop in her tracks. He moved as silently and effortlessly as a big cat. He wore his blond hair in a short, military-precise cut that emphasized the rugged masculinity of his striking features and gave him the look of a gladiator. His plain gray T-shirt and black trousers clung as if sewn onto his heavily-muscled frame. He was so tall Summer doubted the top of her head would reach his shoulder—and she was no shrimp.

Summer took a step toward him and then halted again as a semi-hysterical woman rushed past her toward the man. He handed the little girl and her ball over to her. As the young mother clutched her child and gushed her thanks, the man nodded and looked directly at Summer.

The impact of the man’s gaze made her take a step back and hold her breath. She’d never seen a guy with such beautiful eyes. Long and narrow, they had a slight tilt to the corners that gave him an air of mystery. As he moved, the sun illuminated his irises, which were so green they looked like polished jade between the golden filigree of his thick lashes. But the intense way he looked at her was what made her heart skip a beat.

Are you the one who’s been watching me? Do you know me?

As if he could read her thoughts, the big man inclined his head, before he climbed back into his car and drove off.