Romance in the Ruins Book 3 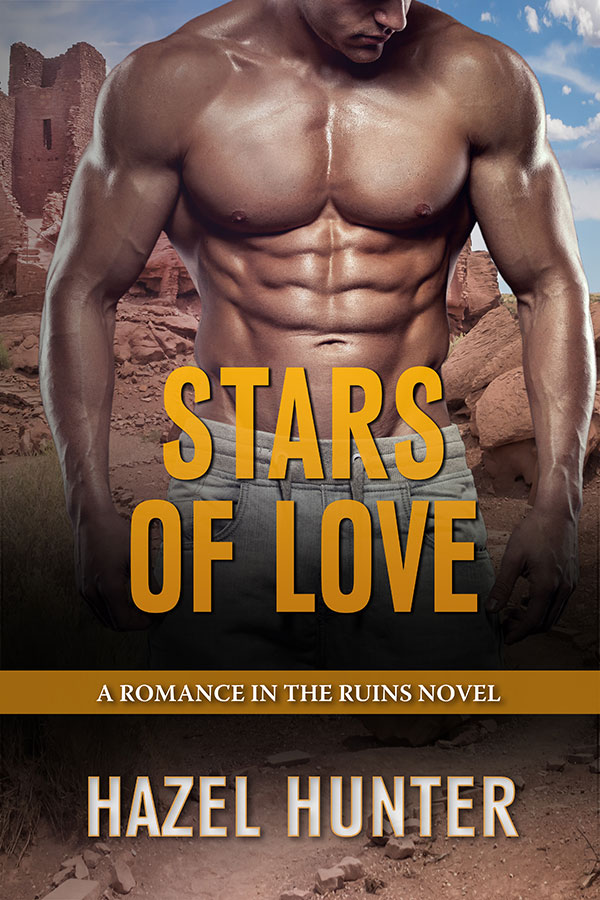 A reclusive billionaire. A sheltered academic. An journey that tests both their hearts.

When astronomer Rebecca Knight is asked by reclusive billionaire Mitchell Simmons to join an archaeology project, she can hardly say no. Not only will the work help to prove her radical theory about astronomy in the ancient Southwest, she’ll live a real life adventure in the field.

Although the expedition starts well, Rebecca quickly discovers that neither the journey nor Mitchell is what they seem. Wild rumors about the geeky, dot com recluse bear no resemblance to reality. Instead, he’s a thoughtful and commanding presence, not to mention an intensely attractive and sensual man.

Though the torrid attraction between them is unstoppable, the voyage takes an unforeseen turn, jeopardizing the research as well as their relationship. As they race against time and an enemy who will stop at nothing to see them fail, they must pull together or they will die.

IT WAS THE most improbable of meetings. In fact, as far as Rebecca was concerned, the whole trip had taken on a surreal quality.

“I’m Rebecca Knight,” she said, extending her hand to the older and slightly pudgy man as he stood.

“Ned Rutherford,” he said, smiling broadly as he took her hand. His white, handle-bar mustache lifted crazily at the corners of his mouth as he removed his cowboy hat to reveal a perfectly bald head. “Pleased to finally meet you.”

“The pleasure is mine,” she gushed.

The small hangar at the Four Corners Regional Airport of Farmington, New Mexico, housed what appeared to be a private jet at its center, several military-looking vehicles, a small army of men either loading them or fixing them, and a clump of office furniture in one corner. Dr. Ned Rutherford, one of the most well-known and widely respected Southwestern archaeologists in the world, had been sitting there with two other people.

“Well, little lady, if they’d told me how pretty you were,” Ned drawled, “this would have happened a whole lot sooner.”

He gave her a little wink.

The attractive, young brunette who’d been sitting with Ned quickly rose from her chair, stepped forward, and cleared her throat. Slim, moving with an easy grace, she was nearly as tall as Ned, who was tall.

“And may I introduce my assistant, Dr. Eve Campbell,” Ned said, finally letting Rebecca’s hand go. He turned to Eve. “Eve, this is Dr. Rebecca Knight–”

Rebecca did her best not to wince–not only at the pain in her hand but also at the reaction she ought to have grown accustomed to by now. To say her theory of pueblo archaeoastronomy was unpopular was putting it mildly. Eve’s curly brunette hair and blue eyes were striking, as was her face, but the menacing, little curl of her lips was more disturbing than her tight grip.

“And Paul Rivera,” said Ned, as he gave Eve a quick glare and motioned Paul forward. “One of those poor people who’s convinced himself that studying archaeology would be good.”

Rebecca relaxed when Eve finally let her hand go and Paul darted forward, his dark eyes shining, his long, black pony-tail bouncing. Though thin, his small frame had a sinewy look to it.

“Pleased to meet you,” he chirped. “I mean, really nice.”

Though he had to be in his twenties, he gazed at her with that dazed, teenager look that Rebecca had become used to early in her life. She was pretty, and she knew it, but it was one more reason that her astronomy wasn’t taken seriously.

“Nice to meet you, Paul,” she said, careful not to look him in the eye too long.

He shook her hand vigorously.

Paul dropped her hand as though it’d burned him.

“Sorry!” he said, his voice even higher than before.

“No problem,” Rebecca said with a little laugh.

The increasingly loud chop of a helicopter made them all turn toward the hangar entrance.

“Well, well, well,” said Ned. “Could this be our mysterious host?”

Rebecca shielded her eyes against the glare of the New Mexico sun, as the silhouette of a helicopter began to settle toward the ground.

Mysterious was right. Though she didn’t know what Ned’s invitation had been like, hers had come on the phone, in her office at the University of Colorado. The voice claimed to be that of Mitchell Simmons. At first, she’d thought it was a crank call. After Howard Hughes, Mitchell Simmons had to be the most famous recluse in history. A dot com billionaire before he was twenty, a public partier of epic proportions, and a womanizer who was often mentioned in the same sentence as the word ‘harem.’

And then he’d disappeared.

In his mid-twenties, he had simply dropped off the world’s radar. In fact, when he’d called her, it’d taken Rebecca a few moments to place the name. Although he’d only been out of the spotlight for five or six years, for some reason she’d assumed he was dead.

But as he talked about his familiarity with her work and the fact that he’d already arranged for Ned Rutherford to meet them in Farmington, she had gradually been persuaded that he might just be who he said he was. Now, they were all about to find out.

As they watched the helicopter settle down, no one replied. All eyes were focused on the side door. They didn’t have to wait long as the door immediately opened and a figure emerged. Squinting into the bright light, Rebecca saw the man bend over amidst the downwash of the blades. When he stood tall again, striding toward them, Rebecca watched, stunned. Although backlit, the man was definitely a redhead. Strands of it flew around in the wind and caught the light.

This has to be him. Mitchell Simmons has red hair.

But as his silhouette grew larger, Rebecca realized how wide his shoulders were. When she’d gotten off the phone with Mitchell, she’d immediately searched him out on the internet. The most recent photos had been of a good looking man but painfully thin, almost gaunt, and he invariably wore large sunglasses. The man quickly approaching was anything but thin. He was powerfully built, wide at the chest, trim at the waist, with a smooth roll to his long steps. In moments, he was directly in front of her. His eyes were so blue they almost seemed clear and a charming smile beamed down at her.

“Dr. Knight,” he said, extending his hand. “Thank you for coming.”

Mitchell stared down into Rebecca’s hazel eyes for just a moment before his view was cut off.

“Dr. Eve Campbell,” said the woman to Ned’s left, as she thrust herself in front of Mitchell and grabbed his extended hand. “But you can call me Eve.”

Mitchell’s smile faded ever so slightly.

“And I’m Paul,” said the young man to Rebecca’s right.

“Hold your horses,” Ned cautioned him but Mitchell was glad for the opportunity to disengage his hand from Eve’s.

“Paul,” he said, as they shook hands.

At the sound, Rebecca laughed a little, as did Ned.

“And the man who needs no introduction,” said Mitchell, turning to the older man. “Thank you for being here, Dr. Rutherford, and bringing your people with you.”

Mitchell nodded to her but quickly turned his attention back to Rebecca–who was even more beautiful up close. He extended his hand again and did his best not to stare at her delicate face or the lustrous blond hair that framed it. The petite and hourglass shape of her was something he’d already noted from afar.

Her lips formed the most enchanting smile.

“I think you should call me Rebecca,” she said taking his hand.

“Rebecca,” he said. Then he glanced quickly around the group. “Shall we go?”