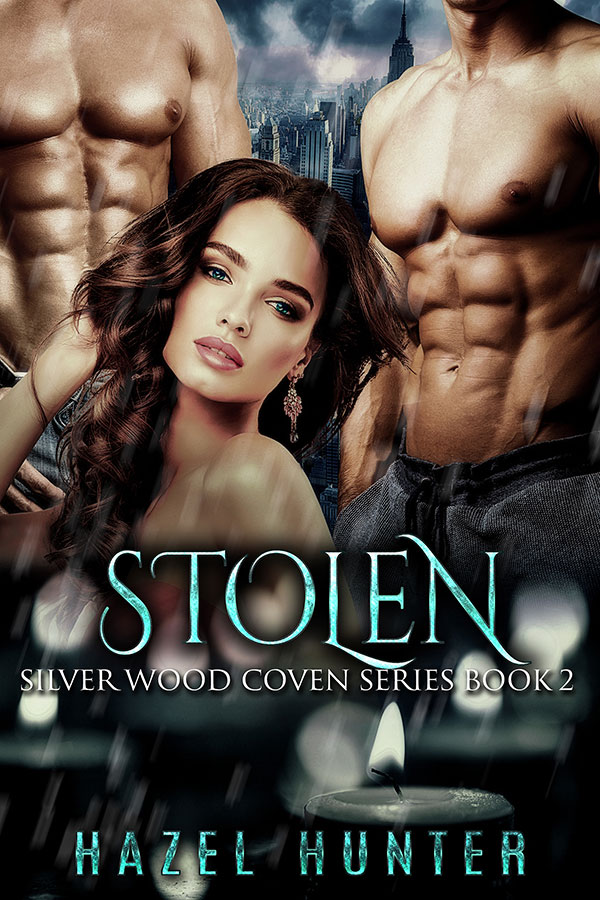 Sparks ignite when her rescuer becomes her captor.

Templar Michael Charbon has been watching the young witch for months. Homeless, beautiful, and living in Central Park, she seems to charm everyone she meets. They shower her with kindness, and yet he never witnesses magic. Only when he rescues her from a rapist, does he understand why: Summer has no memory, not even of her real name. Though he barely resists her inexplicable pull on him, he would gladly break his vows to make her his own.

Magus Corps Major Troy Atwater is surprised to hear from Michael. But their long past together puts Michael’s word beyond doubt. Troy collects the beautiful, young witch from the Templar, before her strange attraction drives half of New York wild. A powerful warlock in his own right, Troy manages to veil her seductive appeal, so that he and the coven can help her. But a passionate bond quickly envelopes them that goes far beyond her charms.

For her part, Summer’s head is swimming. With barely a memory, she can hardly comprehend the ancient world of Wiccans and Templars. More than that she finds herself torn between two very different men. But as the extent of her powers reveal themselves and her deadly past returns in painful snippets, she finds that she isn’t meant to choose between Michael or Troy. She must have them both.

These characters are AWESOME!! I cannot tell you how much I have enjoyed this series. I was a little hesitant cuz of the two guys factor which if done badly can be a killer to a book but it was very well done and you get emotionally invested in all 3 of these dynamic characters.

Yet again the author has written a winner! Book 2 begins right where book 1 left off. Summer, Troy, and Michael's story is starting to come together. Romance, friendship, sex, mystery, and a little magical yumminess…if this description even intrigues you just a little bit, well then you know what to do. And I'm pretty you will enjoy the series, but I believe they must be read in order. So what are you waiting for???

Couldn't put it down! This book was action galore, and I couldn't stop reading until I finished the book. Summer keeps astonishing herself with new found abilities, but still can't remember her past. I'm excited to see her develop both her magic, and her relationships. Can't wait to read the next one!

Great plot development. The story continues to draw you in. I love books that pull you in so completely. Of course the three main characters, Summer, Troy, and Michael have me completely invested in this series, but the plot keeps me coming back. And there's nothing like a completely insane villain as a wild card to keep it interesting.

This story was so well written with such great descriptions, it made getting immersed in the story very easy. I highly recommend this series, not just this book, to all paranormal romance lovers.

SUMMER WOKE UP alone in the dark. Feeling dazed and sluggish, she grimaced over the faint burning sensation in her nose and the awful taste in her dry mouth. When she tried to touch her face she discovered her wrists had been bound together. Shifting her legs revealed the same thing had been done to her ankles, and that she’d been left on top of a bed with cool, clean, silk sheets.

She rolled onto her side to push herself upright with one elbow, squinting as she turned her head. She couldn’t make out any details of her surroundings. Her first impulse was to shout for help, but that might bring whoever had taken her and left her tied up. The last thing she remembered was walking in the woods outside the pavilion. Whoever had done this obviously had grabbed her there, but who? And why?

Sensory memories began scrolling through her mind: her name being whispered softly, the firm grip of hard hands, a cloth with a terrible chemical smell clamped over her mouth and nose. The remorse in his cool green eyes and his voice as he’d said to her:  I am sorry, my Beauty, but you must come back to me now.

Summer was shocked as much by the memories as the croaking sound of her own voice, and the stabbing pain that bounced inside her head and just as quickly vanished.

Struggling against the knots binding her proved useless, so she wriggled toward the edge of the mattress, hoping to ease herself off. When she reached it the silk sheet under her slipped, and she fell to the floor with a loud thud.

She heard heavy footsteps outside the room and rolled, hoping to wedge herself under the bed, but a door opened and the sudden brightness made her freeze like a doe caught in headlights.

“Summer,” Michael Charbon said and lifted her with his strong arms. He  placed her back on the bed and ran his hands over her, checking her arms and legs before peering at her face. “You should not have woken so soon.”

“I guess you didn’t use enough drugs.”

Her voice still sounded horrible, but what upset her more was the sense of relief she felt as soon as he touched her, and the pleasure she took in looking at him.

Tall and powerfully built, Michael strongly resembled a warrior ready to fight for his life in some dangerous arena, but she wasn’t afraid of him. She wanted to wrap her arms around him and run her fingers through his short-cropped golden hair and listen to his deep voice rumbling in his broad chest. He had made her feel safe and protected from the moment they’d met, when she’d been a homeless amnesiac in Central Park. He had saved her from a dangerous rapist.

The problem was that Michael wasn’t her friend. He was a Templar witch hunter, and she was a witch. He had abducted her from the safety of Silver Wood, the coven that had taken her in and had been training her to control her power. What was even more confusing was that Michael himself had arranged to send her to Silver Wood to keep her safe from the Templars.

He obviously changed his mind, or he wouldn’t have brought me back to New York City. So why do I still want to throw myself in his arms and kiss him until neither of us can think straight? To cover her confusion Summer asked, “May I have some water, please?”

He nodded and left her, returning a minute later with a chilled glass bottle. He uncapped it and held to her lips.

Summer drank half the contents before she gasped and turned her face away. “No more, or I’ll be sick.” She ignored the wonderful heat and smell of him as she glanced around her. “This is your bedroom, isn’t it?”

“Yes,” he said, capping the bottle and placing it on the night stand. “You should try to sleep a few more hours now. The effects of the drug should wear off by morning.”

The light came from behind him, shadowing his features, but Summer could hear the concern in his tone. She’d felt the same thing in his touch. Maybe he hadn’t brought her here to hurt her.

“Michael, why did you bring me back? I was happy with Troy and his people—and I was safe with them, too. You knew I would be. You sent me to them.”

“It was a mistake,” was all he said. He switched on the bedside lamp before he rose and walked over to look out the bedroom window. “Have you remembered anything more?”

“No, but I’ve discovered a few things.” Summer checked the distance from the bed to the door, and wiggled backward until she could prop herself up against the pillows. “I’ve been cursed, but the curse stopped working a couple weeks ago. It turns out I’m also not a green witch, and I suck at actual gardening, but I can bring dead plants back to life.” She leaned over and began to unpick the knot in the cords around her ankles.

“That we knew from the effect you had on the Conservatory gardens,” he said softly.

“This would be more like I killed the plants first, then replanted them because I felt badly, and whoosh, they grew like wildfire.” Once her ankles were free, she shifted over toward the edge of the mattress as silently as she could. Slowly, she swung her legs over. “Everyone was pretty nice about it, but then, they’re nice people.” She stood and took a step. Her legs felt a little numb but supported her weight. “How have you been?”

Summer didn’t wait to hear his answer, but tiptoed across the room and stepped out into the hall. She fled down the hall toward the front room and freedom. She was a few inches from the entry door when a big arm encircled her waist and dragged her back against a big, hard body.

“I would have made it if you hadn’t drugged me,” she muttered as he swept her up in his arms and carried her back to the bedroom. He placed her back on the bed and retied her ankles together. Tired now, she watched him knot the cords. “So what have you been up to? Is winter your busy season for hunting and torturing witches, or do they give you some time off for the holidays?”

A muscle in his jaw tightened. “I am not a torturer.”

“Then why am I tied up, Michael?” She watched his eyes, which looked haunted, and felt a surge of anger. “Did you want me to be helpless, and entirely at your mercy? I am. I have been since the night you saved me.”

“You are the least helpless female I know,” he said. He got up from the bed and pulled the coverlet over her. “I would never harm you, Beauty. You know this.”

“I know you knocked me out, tied me up, and took me away from people who were helping me. From Troy, who trusted you.” She wanted to sound angry, but it came out exhausted. “What are you going to do now? Turn me in to the Templars? Since they do like to torture witches, that’s going to inflict a lot of harm, me-wise.”

“I will help you regain your memories, and then I will move you to a safer place.” He bent over and switched off the lamp, and then briefly touched her cheek. “Go back to sleep, Beauty. I will be watching over you.”

Just to spite him she wanted to stay awake for the rest of the night, but her eyelids went on strike and the rest of her body wouldn’t cross the picket line. Until the drugs wore off she wouldn’t be able to escape Michael, if that was even the right thing to do. As she drifted off she thought of Troy, and how frantic he must be by now. In the morning she would have to persuade Michael to call him, and at least let him and the coven know she was safe.