Romance in the Ruins Book 1 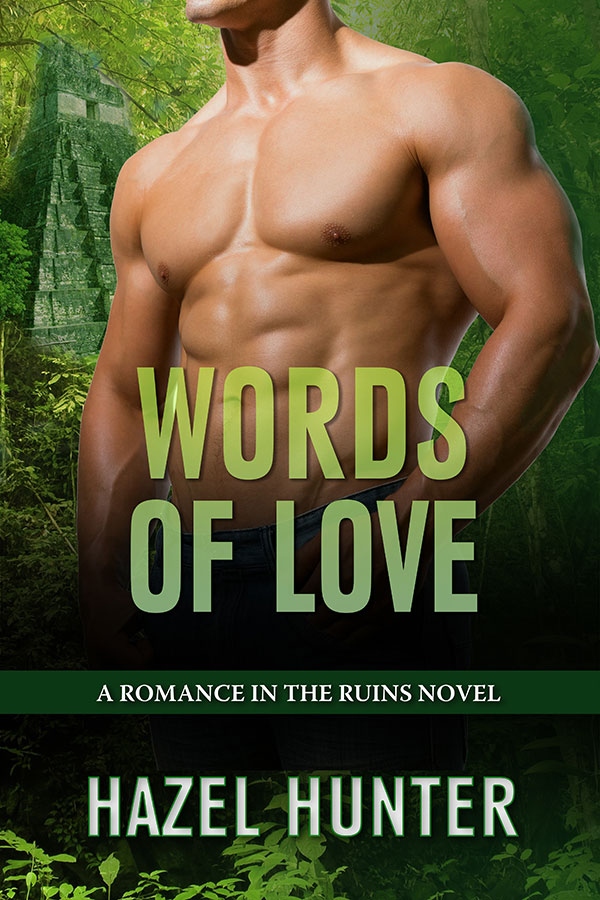 It’s the adventure of her dreams, a race against time, and passion where she least expects it.

Graduate student Jessica Riley can hardly believe her good fortune. She’s finally working among Maya ruins, deep in the Guatemalan jungle. But to top it off, she’s secluded with archaeologist Brett Delacourt, the most gorgeous man she’s ever seen.

Brett has made the find of the century, but he’s keeping the site a secret. He needs Jessica’s singular gift to locate the grand prize: the burial site of the Maya’s first ruler.

Unfortunately Brett’s obsession has put them in the midst of a massive monsoon. Meanwhile Jessica tries to hide her lack of experience and the worsening symptoms of an illness. But as they make one thrilling discovery after another, their shared passion boils to the surface. Little do they know that the waning storm has held looters at bay.

IF THE TIMING wasn’t right, Jesse knew she’d end up in the brown water. She perched at the bow of the Zodiac as Brett maneuvered them closer.

“Don’t go until I say go,” Brett called from the rear.

The mud and water sped past them as Brett gunned the single outboard engine, fighting the river’s strong current. The embankment was steep and the jungle began immediately at its top. There was no room for error.

Jesse stood up, one foot inside the hull and one on top of the inflatable round edge. She steadied herself with her left hand and held the rope in her right.

A month ago, she thought, if someone had told me I’d be on a river in the Guatemalan jungle, I’d have told them they were crazy. She grinned. It certainly felt crazy—but crazy good. Crazy–

Quickly, Jesse stood on the rubbery edge. Although she was slim, it started to give under her weight. Before she could teeter, she jumped—and mostly got it right.

Both feet splashed into the water and, to her shock, she sank to her waist. She gasped and reflexively held her arms up to keep them clear of the water. It was moving so much faster than she’d thought from the boat. Now she understood the necessity of the orange life vests they wore. She immediately started for the embankment and felt the rope go taut.

“Give yourself some slack,” Brett yelled over the straining engine.

She let some rope slip through her hands but didn’t turn around. It took every bit of concentration to keep her footing. One small step after another, she moved toward the low embankment. As she got nearer, she moved more quickly and finally her waist rose out of the water, then her thighs and knees. In another few moments, she was standing in mud.

She smiled and finally turned to him.

Leaning forward, with one hand on the throttle, the only thing he was missing was the leather jacket and fedora. His lightweight shirt and pants clung to him in the humidity. The life vest seemed dwarfed by his broad chest and shoulders. Through the opening in the middle, his shirt was open a few buttons. It’d been like that all day. Her eyes had repeatedly been drawn to the shadowed curves of his chest and then down to his tapered waist. His deeply blue eyes always seemed to glitter and his thick, blond hair was always perfectly tousled. Brett Delacourt wasn’t just the most handsome professor at school, he was the most gorgeous man she’d ever seen.

He pointed up the embankment, snapping her out of her reverie.

“You’ll be safer up there,” he said, his other hand constantly moving the tiller to compensate for the current.

Right. Concentrate. She looked around her. He has nowhere to put the boat but this embankment.
She turned, found a less steep section, and climbed the slick slope. At the top, the rope was taut again.

“Good,” Brett called. “When I beach it, tie the rope around something as fast as you can. The bigger, the better.”

“Okay,” she said, and looked behind her.

“Here I come!” he yelled as she heard the engine whine.

The rope went slack in her hand, and she dashed to the nearest tree, about two feet in diameter. Though she heard the boat bottom grate on the embankment below her, she didn’t turn to look. She quickly circled the tree a couple of times and then made a knot.

Heart pounding and a little breathless, she watched as he turned off the engine. The river pulled at the back of the boat, turning it parallel to the shore, but the front stayed on the mud and the rope held it in place.

He turned off the engine and raised the rotor out of the water.

As her heart rate slowed, it finally occurred to her to look around.

In every direction, the jungle was thick. The further they’d come up the Pasión River, the narrower it had become and the denser the rainforest. But it wasn’t just any rainforest—it was the heart of the pre-Columbian Maya world.

She took a deep breath and slowly let it go. Words from the Popol Vuh, the creation story of the Maya sounded in her head.

Then, when the gods meditated, they knew that man must appear. They planned the creation, and the growth of the trees and the thickets and the birth of life and the creation of man. Thus it was arranged in the darkness and in the night by the Heart of Heaven.

Handwritten lines of sepia ink floated in front of her eyes as she quickly translated the archaic Spanish and their attempts to imitate Mayan K’iche.

He was standing directly below her and handing up her suitcase.

“You can take off the life vest,” Brett said as Jessica grasped the shiny, purple, hardshell luggage. “I’ll stow them with the boat.”

Her tennis shoes were nearly at his eye level and he couldn’t help but glance at them again. They should have been my first clue.

Brett looked up at Jessica as she hauled up the suitcase.

And the baggage should have been my second.

Actually, any number of things should have warned him. In his own department, it was a given that archaeologists did at least some fieldwork. In fact, it was a requirement for his students. But not so in art history, where Jessica was a grad student. Although she’d said in her emails that she’d been to the field, that couldn’t possibly be true—at least not in Central America.

Tennis shoes instead of boots?

A suitcase and not a backpack?

He watched her, off in her own world again. It gave him yet another opportunity to regret this whole idea.
He needed an epigrapher now, no doubt about it––someone who could translate the Mayan glyphs on the spot, as needed, and on the fly. And he couldn’t turn to any of his usual colleagues. That would be a mistake. He’d worked very hard to keep his discovery a complete secret and, up to this point, it was. The most fabulous archaeological discovery in memory was still unknown to the rest of the world. But he wasn’t going to make any progress without glyph translations, and it wasn’t his specialty.

If he brought in any of the recognized authorities, word would spread like wildfire. Just the presence of an epigrapher on a site with him might be enough. But a student, and a girl at that, would only feed his growing reputation—false as it was.

He grimaced at the thought.

As Jessica took off the vest, he couldn’t help but think that her clothes were the last indication of her lack of field experience, though he hardly needed another.

They were the clothes she wore at school, bulky and oversized, and too heavy for this weather. Instead of the usual baseball cap, she wore a canvas sun hat, like the ones you could buy in the airport. With the big glasses, the bandana around her neck, and the long sleeves and pants, the only skin that was exposed to the sun was her hands. He looked at them as he took her vest. They were so white that they were almost bright, even under the thick cloud cover overhead. He hoped she was using sunscreen.

He stowed the vests and took his backpack, stocked to the gills with supplies. All of his own gear was already at the site, accumulated and cached over the last few years. As he tied the vests down, he remembered the questions of the man where he’d rented the boat. Brett had been surprised that Jessica was as fluent in Spanish as he was, but he had motioned to her not to answer the questions. He fielded them, and there had been too many. Yet another reason to get this site guarded, excavated, and published. But not until he’d found what he was looking for––the thing that all Mayan archaeologists had been looking for.

He shouldered the pack as a few big drops of rain hit the boat with hollow thunking sounds.

Tropical Storm Angela had not cooperated. Even in the short time they’d been at the shore, the river had risen at least two inches. He glanced upstream. Somewhere to the north rain was falling—a lot of it. He’d known from the start it was going to be close. The swift and swollen river was higher than he’d ever seen it. They needed to get to the site—fast.

He climbed the embankment and checked the knot in the rope. He gave it an extra yank and felt it tighten. When he turned to Jessica, she was smiling. Actually, she never seemed to stop smiling. Here in the mud, with a hard rain beginning, and already a day of travel behind them, she was smiling. And though he was used to the female students doing exactly that, it wasn’t one of those ‘please notice me’ smiles. She was happy. Her eyes said it, even through the thick glasses. Although he usually didn’t encourage students—his reputation did enough of that—he couldn’t help but smile back at her.

Thunder rumbled overhead and they both looked up at the sky.

“This was to punish them,” she said. He stared at her. “Because they had not thought of their mother,” she continued, still looking up. “Nor their father, the Heart of Heaven. The face of the earth was darkened and a black rain began to fall, by day and by night.”

That had to be the Popol Vuh again. She quoted it the way English majors quoted Shakespeare.

As another peal of thunder erupted, he glanced back at the boat—last chance to ditch this whole idea and go back. He’d brought an inexperienced student to the Petén jungle, in the middle of the season’s first tropical storm. Obsession, his wife had called it.

Ex-wife, he corrected himself.

The rain suddenly started to come down in sheets.

“Stay right behind me,” he said, as he pushed into the foliage.